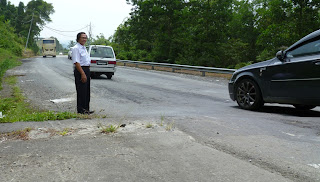 SABAH DAP Vice Chairman, Edward Ewol Mujie received many complaints from road users on the Tamparuli to Ranau road at KM5 where there is a 60 feet long depression of up to 3 feet deep.

The drivers said they were almost killed due to the sudden appearance of the depression in front of their cars which cannot be clearly seen even in the day time. When driving in high speed and going downhill.

It is very difficult to make any emergency stop, therefore many vehicles bumped and plunged into the deep depression. The vehicles normally sustained damage and drivers shocked. Some cars even caught fire and burnt down due to the heavy bumping.

There is no clear marking on the road surface using yellow paint to mark the settled area so as to warn the drivers. A few warning sign boards were placed along the road side to warm the drivers, but this is not enough to stop the cars from driving into the deep depression as observed on site. The depression is really too deep for the small cars to cross.

Edward said the depression should be quickly filled up by the JKR road maintenance before any serious accident could happen, and someone got killed. Don’t blame the drivers for careless driving because this is a ‘death trap’ created by the non-performance of the JKR.

This depression shall be filled up and made level temporarily by sending in some trips of crusher-run (stone). This is only a few hours of work, why waited and left this open, and become a dangerous spot to drivers. The depression has been there for half a year now, and for how long we have to wait before it is made good. May be there will be more accident happen before it is repaired.

Edward wants the JKR to repair the section of road immediately without further delay. The warning yellow paint to mark on the both ends of the depression must be painted now. Any further accident incurred will be the responsible and liability of the JKR.