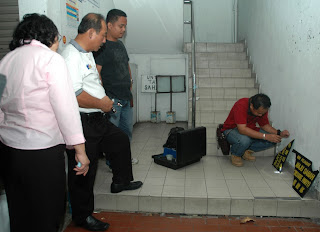 AN UNEXPECTED event occurred at the headquarter of the Sabah Progressive Party (SAPP) on Sunday night, when its plastic sign plate put up at the exit of the stairways leading to its office was vandalized by someone.

This was discovered after a party member who was informed about the incident by a shop operator there, alerted its Information Chief Chong Pit Fah at around 10pm.

Yong then went to lodge a report at the Luyang police depot. Half-an-hour later, the police dispatched its forensic team to investigate the matter. Also present at the scene was the police officer on duty, Inspector Nazaimi.

The police forensic team spent about half-an-hour collecting the evidences, before leaving the scene, at around 12:08am.

While suspecting that the incident could be politically-motivated, Yong said the party would wait for the outcome of police investigation before commenting further.

The incident happened just hours before the scheduled hearing of the ongoing dispute between SAPP and the Kota Kinabalu City Hall (DBKK) over the party’s on-line media ‘SabahTV.Net’ signboard, at the High Court here, today, at 9am.

The party’s office on ground floor experienced a broke-in in March, 2010. A camera, computer hard-disc and pen-drive were among items stolen from the party’s Luyang CLC office. There was another attempt to break into the party’s first floor office in May this year.

The office had installed CCTV and will submit the recording where two men suspects were spotted at around 6.00pm on Sunday to the police for further investigation.

On last Friday, the opposition party served a writ of summons on the City Hall for attempting to take down its Sabahtv.net signboard which bore the phrase ‘Bersih, Berani, Benar’ at the party’s headquarters here on the July 9 and again on July 11.

Among the main contentions in the writ is that the Kota Kinabalu Municipal Council (Advertisement) by-laws 1983 do not apply to non-commercial entities.

The by-laws states: ‘Signboard’ means any board which displays the name or the registered trade mark of any person, firm, corporation or organisation and the nature of the trade, business or profession carried on by such person, firm, corporation, organisation and which is visible from any street or public place and which is fixed to or painted on the façade or street frontage of or in the actual building where such trade, business or profession is carried on but not on side walls, fences or open spaces between the street and the said building.

NGOs, societies registered under the Society Act, schools, government departments, religious bodies and political parties which are non-commercial or non-profitable organizations need not apply for licence from DBKK so long as long as their signboards are safe and contain no words that are prohibited by laws.