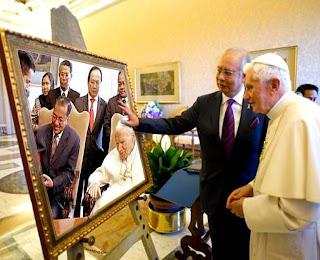 DATUK Seri Najib’s recent visit to the Vatican is admittedly something to be glad about for all peoples of Malaysia, regardless of their religious beliefs and practices. However, I tend to agree with Tan Sri Bernard Dompok who said the visit promises no magic. He should know because he also was part of Tun Mahathir’s delegation in the first official visit to the Vatican to meet the late Pope John Paul II.

As Malaysians, we have to wonder as to why the visit was made at this time. It is very probable that Najib wanted to catch two birds with one stone with the visit, to appease Malaysian Christians who have been deeply hurt by all the mistreatments and shenanigans thrown at them, and to help rebuild Malaysia’s image abroad after all the negative publicity generated in the international media which painted the Malaysian government as having a strong anti-Christian internal policy.

Immediately, the visit which later produced photographs and videos of a humble Najib shaking hands with a slight bow to the Pope, should have served to partly silence some of the anti-Christian rhetoric at home, and to reduce the strong anti-Christian sentiments of many Malays who even went to the extent of antagonizing Christians with deeply hurtful slurs and name-callings. How can we ever forget the torching of churches, and the throwing pig heads into mosques, which clearly wasn’t done by Christians.

The most unbelievable development was when a group demanded that crucifixes be removed from churches when Muslim government leaders are coming to visit. The concocted story of some Christians and Chinese plotting to install a Christian Prime Minister and the ensuing statement by the notorious Ibrahim Ali that he would be willing to bath in the blood of Christians to defend Malay rights was reaching the edge of insanity, and was testing the patience of even the most prayerful of Christians.

Returning home, Najib had followed up with calls to move from tolerance to acceptance, to close existing interracial gaps, admitting “there are still dividing walls and feelings of our difference”.

The dividing walls are thick and the gaps between religions have widened due to his own neglect. So surely, despite all these, not enough is being done to integrate Malaysians into a more harmonious co-existence.

The Prime Minister needs to be more aggressive in addressing the anti-Christian sentiment among Malays. Instead of just encouraging Malaysians to embrace acceptance, which is very vague, he needs to say unequivocally, daringly, sternly, and explicitly that “It is time to stop antagonising Christians.

Let’s embrace them as our Malaysian brothers! We need the Christians. They are a part of our national brotherhood to move the nation forward!” But dream on! I believe this kind of wise and conciliatory gesture will never come out from Najib for fear of losing Malay support.

But there are very urgent things to be done. On top of the national unity, national integration, 1Malaysia and tranformasi that have become hollow buzzwords, Najib needs to address urgent Christian-related problems. One of this is religious justice. Christians need to feel that they are first class citizens again on par with the Muslims, with full and unhindered rights to practice their religion.

The ‘Allah’ issue must be solved immediately, and not delayed as the government tactical maneuvering for so long. Indecision is a decision and delayed justice is justice denied. Gerakan president Tan Sri Dr. Koh Tsu Koon had said that the renewed Malaysia-Vatican ties will boost the long-avoided interfaith dialogue, with Vatican playing a role to “promote the values of moderation and inclusiveness.” Let’s see if that is not just sweet talk.

The national development agenda must include the development for all religions and for all religious groups, and not just the official religion. Christians and Hindus are forced to build their houses of worship with their own funds while mosques are all build with the people’s money.

But logically, other religions deserve the same treatment because they too pay all sorts of taxes. The national budget must make provisions for Christian activities, including ministry and missionary works (among non-Muslims), welfare, motivation and education.

All government officials, especially in the Customs Department must from now on be told never again to confiscate any Bibles of Christian books. And the promise to allow free import of Bibles and printing of Bibles in the country, including in Malay, must be clearly reassured and fulfilled.

Only this way Najib can show the world and the people of Malaysia that the Vatican visit wasn’t just a showpiece for international public relations but for real change towards not just religious tolerance but inter-religious ‘acceptance’ and openness at home.

Najib shouldn’t fear losing the Malay votes with such a policy because the BN’s survival so far hadn’t been because of mainly Malay votes but votes of non-Malays, especially those in Sabah and Sarawak.

All these while Najib has been seen as dilly-dallying on reaffirming interreligious harmony, pandering to the bigotry of religious fanatics who think nothing of creating unrest and havoc. He has developed an image of an indecisive leader, controlled by Malay extremists. He failed to show wisdom and diplomacy in his handling of the recent Bersih 2.0 rally, showing his muscle with a brutal crackdown.

But after his Vatican visit, after the establishment of what is now called the Malaysia-Vatican alliance (alliance in what?) he can change his image to that of someone with an astute and strong character by doing the right things.

But the bet is that he won’t, and the magic we expect will not materialize. He had also addressed the United Nation’s assembly previous to this, during which he talked about the need for human rights worldwide, and yet came home to deny that very right to many Malaysians.

Do we have to wait for a real magic only after a third Vatican visit by the next prime minister? If so, then it may be too late for many of us.