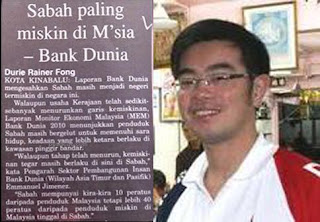 DAP Sabah is telling Sabah government to stop denying the fact Sabahan are living in hardcore poverty, instead should start working more efficiently on this issue.

Dr Hasan actually hinted that Child mortality has alot to do with hardcore poverty, Junz said.

He was quoted saying "if the number of child mortalities is to be reduced effectively, maintaining health and prevention of diseases are ultimately more cost effective and have more impact in the effort to reduce childhood mortality compared to fighting diseases that have already set in."

Junz asked, "How can families maintain their children good health and prevention of diseases when they are struggling to make ends meet?"

It is the environment and the living conditions of their well beings which have contributed to child mortality figures, especially in the interior and remote areas. Many rural villagers don't even have proper water supply so they cannot even maintain cleanliness even when they wanted to, which has contributed to food and mouth disease at one time, was rampage.

“What happened to millions of allocation of poverty eradication programs?,” Junz asked.