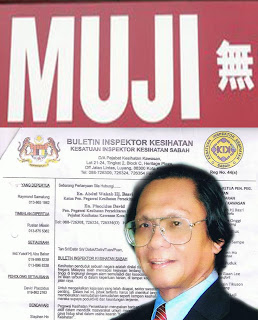 THE SABAH Health Inspector Union which is under the Federal Ministry of Health is going around the various towns in Sabah collecting money for the purpose of putting up advertisement in their bulletin.

This was brought up by the Kota Kinabalu Member of Parliament Hiew King Cheu recently after receiving public complaints especially from the food operators.

The Sabah DAP Vice chairman Edward Ewol Mujie commented on the issue that he felt the going around to get the restaurants, eateries and coffee shops to put up advertisement in the bulletin of the Sabah Health Inspectors Union (Kesatuan Inspektor Kesihatan Sabah) is not right. He said this tantamount to and can be classified as a case of abuse of power, extortion, corrupt practice, conflict of interest and it is illegal.

On the part of abuse of power, it is very clear that the health inspectors are using their vested power to threaten the food operators using the tactic of penalizing them on various hygiene matters in the eateries to make them to subscribe for an advertising space in the bulletin. Naturally, the operators have no choice and to avoid troubles, they would subscribe. 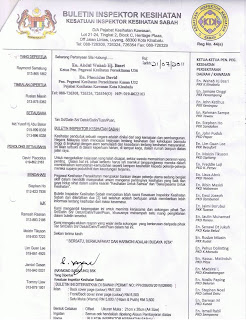 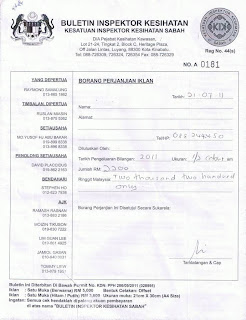 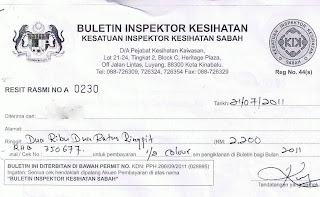 Edward further pointed out that the public collection of advertisement is done without a police permit and a permit from the CM department. The Union has only a permit to publish a bulletin and it doesn’t mean that they can go to the public for public fund raising through advertisement printing.

It is also not right in their line of duties while executing a task of inspecting the cleanliness of the eateries, the inspectors also seek money for their bulletin. This reflects that there is a conflict of interest. The operators are very unhappy about the way that the inspector had handled the matter.

A meeting was conducted by the KK MP Hiew King Cheu with the Head of the Union concerning the bulletin. The grouses and complaints from the eateries and food operators were forwarded to the attention of the Union.

The Union was made to understand about the various implications and legality concerning the advertisement drive. According to sources, the Commercial Crime unit of Police has commenced investigation on this case upon receiving police report made by the public.

Edward advised them to stop the activity on the public collection of advertisement for the Union’s bulletin.