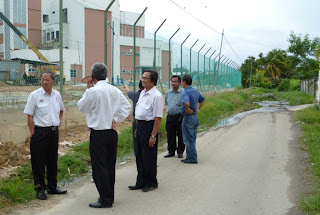 THE KOTA KINABALU Member of Parliament Hiew King Cheu was called in to help to solve the frequent flooding situation at the residential area behind the newly constructed RTM Complex in Kapayan, next to the Lintas Highway.

The houses behind this complex and their access road were frequently flooded whenever it rains, and the road became inaccessible to cars. This has caused much inconvenience to many residents in the area for many months. Their access road is already damaged by the flooding.

After conducting an inspection of the area with the JKR District engineer and the representatives of the contractor, it is clear that the newly constructed perimeter drain and high filling up the ground of the complex did cause the blockage of water flow from this area to the main drain. The ground level of the new site is much higher than the housing area, thereby the water has no way to flow out.

After discussing with the engineers, the contractor has agreed to assist to dig a deeper and wider drain to drain the stagnant water from the area. The work on the excavation of the earth drain will be undertaken by the contractor. 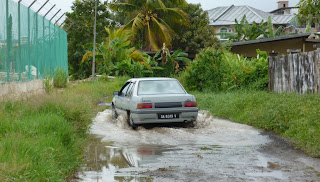 Hiew also requested the JKR engineer to assist to build up the road level to avoid any future flood that is affecting the people here, including some concrete drains to be built.

Hiew said he noticed that many drains in and around the Kapayan area are not being clear of vegetation and rubbish regularly and they are all clogged up. There will definitely flooding if the drains are blocked. The JKR road maintenance contractor and the Penampang District Council workers are urged to take action to regularly clear all these drains in the Kapayan area.