ADVERTISE OR FACE THE MUSIC 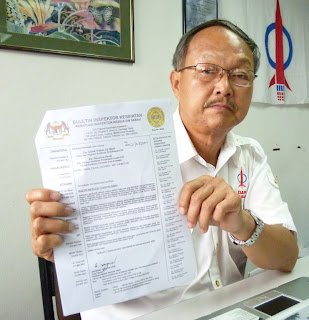 RIDICOLOUS…. Hiew showing the letter from the association.

THE PEOPLE who are operating eateries and restaurants in Sabah especially those in Kota Kinabalu had been threatened by a certain group of ‘health inspectors’ from an association related to health and hygiene.

The food operators are asked to pay expensive advertisement fees ranging from few hundred ringgit to something like RM5,000 for an advertisement page in their bulletin.

These health inspectors warmed the operators if they don’t agree to take up to advertise in their bulletin, they will take action against them by imposing fines and even close down their shop for any unhygienic aspect in their shop.

Many people had approach the KK MP Hiew to lodge their dismay and anger towards such a way of forcing and threatening them to take up advertisement space in a bulletin which they have never heard of. They further said that the health inspectors are working in a team of two, coming to the shop and demanding the food operators to pay for the advertisement fees.

The people also told Hiew that the health inspectors also said that they are linked with the health department in DBKK, and working together on this advertisement project. It is easy for the DBKK health inspectorate to summon and close down their shop.

Many people had fallen into the threat and pay money to put up an advertisement, some even paid RM2,500 or more. A few of the operators felt that they have been cheated and made the police report on the case.

Hiew viewed this case as very serious, and he immediately contacted the person in charge of this advertisement collection for the bulletin. He wanted them to immediately stop the threatening act on seeking for advertisement.

Hiew also contacted the DBKK Health section enquiring on the background, he was told by the health officer-in-charge in DBKK that this case is not connected to DBKK, and they are not involved in helping the association in the particular act. It is also learnt that such activity had been extended to cover the whole Sabah.

Hiew urges the people to be alert to this type of money collection in the future. They can call his office immediately if they come across and not sure about any public money collection and donation, and to verify whether it is genuine.