FREE LAND FOR SABAHAN TO PLANT 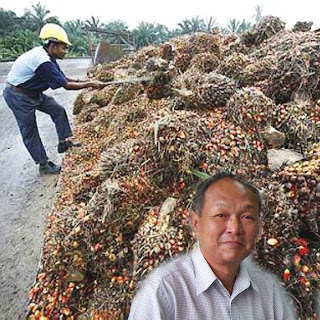 THE KOTA KINABALU Member of Parliament Hiew King Cheu asked the Federal Minister of Plantation Industries and Commodities in Parliament last month on how the federal government can help to process the oil palm fruit, and also on the assistance that can be provided to help other types of agriculture produce in the Kudat district.

The Minister written reply stated that in the Kudat district there is a total 7,026 hectares of oil palm planted by the small holders up to 2010. In order to help the small holders in the district, there are a total number of 10 companies to purchase their fruits and there are also two processing mills.

For the purpose to boost the productivity of the small holders, different types of assistance are provided by the government as follows:-

a)To provide assistance for the replanting of rubber for RISDA with RM9,230 per hectare in West Malaysia, RM13,000 per hectare for Sarawak and RM14,000 for Sabah with a period of five years.

b)Assiatance on the replanting of oil palm for small holders (TSSPK) (Tanam Semula Sawit Pekebun Kecil) is RM7,000 per hectare, and

Hiew views this is not good enough if we are serious in getting the agriculture sector in the Kudat District to get on to a higher level of production. The Sabah government should let the people to use the huge area of cultivable state land here to plant more agriculture crops. The vast area of state land, about 2 million over acres are idling and not productive. It is growing with plenty of useless grass and bushes.

Hiew further stressed that the land policies in Sabah should be changed to allow the Sabahan to have free use the government land which are idle and abandoned. The people who are illegible are to be given land to plant and make the land productive.

There are many Sabahan who are capable to plant but there is just no land for them to plant. Just imaging if the million acres of idle state land if they are being opened up by the people with the help from the government, what will be the eventual income for the state and the people? This sum will definitely be very big and will bring much progress to the Kudat district.

Hiew proposed to allow the Sabahan to utilize the idle state land based on a ‘non-transferable lease/deed’ and for a specific condition and period of usage, and it is not allowed to be sold or charged to the bank. It is only allowed for personal application, and the land size applied for is not more then 20 acres each, so that more landless Sabahan can have a piece of land to work on. Why should the big companies come to Kudat and Kota Marudu district to grab the land from the poor kampong folks, and not giving the kampong folks land to plant so as to increase their income?

From the answer received from the minister, it is very clear that the BN government did not have a proper plan to uplift the agriculture production and the well being of the people in the Kudat district. The land owned by the people and available for planting of agriculture crops is small and limited. Therefore, the government should consider opening up big area of government land for the use of the people.