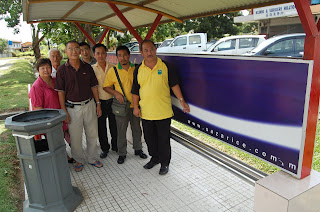 ADVERT….Chong (first right) showing the advertisement signboard which is causing inconvenience to the public.

THE people in Kepayan Low Cost Housing area are complaining the way the advertisement board is placed at a bus stop here, which is causing inconvenience to the users.

Sabah Progressive Party (SAPP) Information Chief, Chong Pit Fah said he received a lot of complaints especially from senior citizens who were forced to sit uncomfortably at the bus stop due to the signboard placed behind the seat.

“I invite the Mayor, Director General and City Hall licensing officers to come and experience the inconvenience for themselves by sitting at the bus stop, which the people here are forced to endure,” he said.

Chong said the City Hall was so swift and efficient when it came to SAPP headquarters in Bornion Centre to take down a signboard just because it was yellow in colour and had the word ‘Bersih’.

“If the City Hall can act so fast on this why can’t they act efficiently and attend to the people’s grouses in Kepayan?” he asked.

According to him, one of the Kepayan folks who complained to him was an elderly who was recovering from surgery.

“He depends on public transportation but he had to endure pain while waiting at the bus stop as he had to sit upright stretching his surgery wound due to the advertisement signboard behind him,” he said.

“We want City Hall to prioritise the people’s interest and not just quick profit,” he said, adding that the designer of the advertisement signboard should also come to look at the effect of the design on the people.