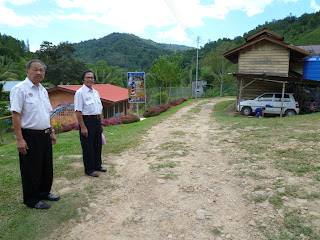 ROAD….Hiew and Edward inspecting the access road to the Kg. Kerokot school and clinic.

SABAH DAP Kota Kinabalu Member of Parliament Hiew King Cheu and the Sabah Vice Chairman Edward Ewol Mujie on Tuesday this week had made a visit to the Tambunan District. They visited the Kg. Kerokot which is situated on the way from Tambunan to Ranau road. The people there welcomed the visit of the KK MP.

Hiew said even though it is a small kampong, but the people here also deserved good facilities like the city folks have. The Kindergarten and the primary school here in Kg. Kerokot need to be upgraded with additional facilities although the student number is small. 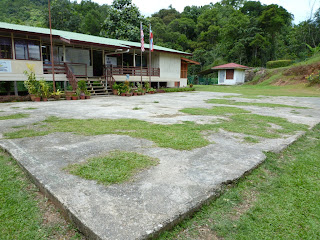 There are some 80 over student in the primary school with 12 teachers and a principal. The concrete pavement in front of the school needs to be repaired because that is the assembly place where the student gathered.

There are many other problems brought forward to the notice of the KK MP during the visit. One most common complaint is on the poor condition of the kampong roads and bridges. There are quite many kampong roads needed urgent attention on the maintenance and upgrading. Some is even impassible now.

The main road leading from Tambunan to Ranau has many parts which are either collapsed, settled, cracked up and even near cut off. JKR should come up with immediate plan to repair all the problem are and not just leaving these defects like that. What is the maintenance team doing, did they notice the defects? A reminder that road accident can happen any time due to the road defects especially due dark hours.

Mean while the KK MP and his team will continue to visit the various remote kampongs in the rural district to find out the difficulties and problems faced by them. Many complaints were not heard and being brought to the attention of the authorities.