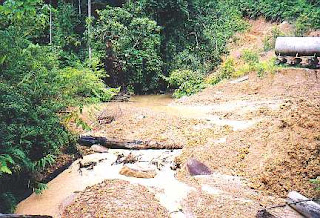 THERE had been countless issues of public complaints made by villagers over the bad road conditions that affected their livelihood.

In Keningau District alone, many cases related to the rural dirt and muddy roads, damaged roads filled with potholes, etc whereby positive actions had not been taken to improve the rural road infrastructures despite the Government made promises to upgrade rural roads with the huge allocation of Billion Ringgit for the rural infrastructure development.

It was true that the roads were very bad that were filled with potholes and muddy as also recorded by Sabah DAP mobile service team while they were travelling in the rural areas to inspect the rural infrastructures and amenities.

Sabah DAP Parliamentary Liaison Chief, Dr Benjamin Yapp recently made another visit to inspect the latest conditions along Jalan Kampung Kuangoh, Bingkor, Keningau which was just less than 10 Kilometres from Keningau town after having received numerous complaints from the residents of Kampung Kuangoh that the entire stretch of earth-gravel road along Jalan Kuangoh was affected by heavy dirt pollution whenever motor vehicles passed by, caused the surrounding areas with residents having to put up with the unhealthy and dusty pollution problems during the dry weather conditions.

Some elderly villagers complained of lung disease and asthmatic problems due to frequent inhaling the heavy dirt caused by the pollution.

The villagers had been deprived of rural infrastructure development for decades. Why is the Government neglecting the poor villagers there while they even have made latest plan to waste tax-payers' money with the proposed construct a RM335 Million Government administration building in the State Capital?

The rural communities deserved to enjoy rural infrastructure development in order to enhance a better standard of living for the rural people.

Many rural folks had suffered from the lack of amenities like adequate piped water and electricity supply to certain rural areas in the interior.

Sabah DAP urged the local authorities to take prompt actions in order improve the standard of living of the rural communities with the maintenance and upgrading of rural roads to that of asphalt in the interior districts of Keningau and Tenom in Sabah, Malaysia.