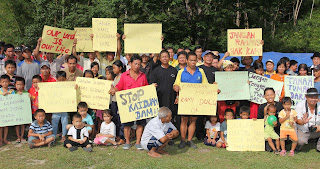 It said that the act of betrayal has left the people in a state of despair and hopelessness.

“The recent statement by Pairin with respect to the proposed Kaiduan Dam has further cemented this belief,” said Stephan Gaimin, who is the chairman of the Solidariti Belia Sabah, after witnessing the peaceful protest of the Kaiduan Dam in Kampung Timpangoh Sugud recently.

The Solidariti Belia Sabah was set up after a get together of youths from Sinakut, Tungku the site of the controversial coal power plant, and from Kg Tambatuon, Kadamaian as well as from the various villages affected by the proposed Kaiduan Dam. Thereafter, a joint memorandum of protest was sent to the Chief Minister of Sabah, Datuk Musa Hj Aman during the 2010 September DUN sitting.

“Since the proposed Sinakut coal power plant has been scrapped and in spite of that, we still have youths from Sinakut to continue the pledge to rid Sabah of all three controversial Mega projects,” Stephan explained.

“The lesson learnt from Sinakut cost the taxpayers RM70 million being compensation paid to the Contractors. If letters of Intent or even worse, letters of Award, have been given to Contractors to these two proposed Dams, would a retraction later on cost the taxpayers more? It is only prudent to exhaust all other avenues to ensure ample clean treated water for the future as well as to ensure that Sabah is self sufficient in the production of rice.

“The message from the affected villagers was clear, said Stephan. They just want to be left alone to work the land left by their ancestors. They lamented that it is a cruel twist that the two proposed sites for the monstrosities are areas populated by KadazanDusuns, the very community that Pairin as the Huguan Siou has vowed to defend and protect.