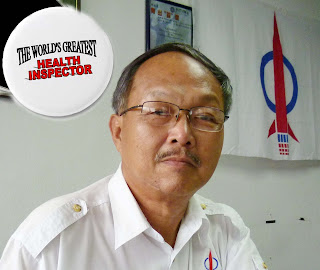 THE KOTA KINABALU Member of Parliament, Hiew King Cheu has today made an official note to the Ministry of Health Dato’ Liow Thiong Lai regarding the situation on the overlapping on the jurisdiction and power between the health inspectors which are under the federal health ministry and the health inspectors from the local government’s councils and the Kota Kinabalu City Hall.

It is generally noticed in Sabah that the Federal Health Ministry inspectors are coming to do exactly the same work like the councils and city hall health inspectors are carrying out in regards to the cleanliness of all eateries and food outlets. In this case, which one should the food operators listen to, and can the operators be issued double summonses from them.

Hiew learned that the role of the council and DBKK health inspectors are mainly focusing on the public health, cleanliness and hygiene of the city and main towns. The federal health inspectors have a different bigger role to undertake the responsibility of checking on the vast area of food producing factories, farms, plantations, import and export of food stuffs, deceases, food stuff on sale in supermarkets, pests, food processing, preparation, raring and growing, transporting, storing, handling, production and serving etc.

Now it looks as if the federal inspectors are crossing into the urban and suburban areas, the city and towns, which are the responsibility of the local councils and DBKK. The people are confused and upset having to face repeated checking and queries from both the federal inspectors and the local council inspectors. Sometimes they do not know who is right, and who has the power to fine them. There are cases where they faced double penalties.

MP Hiew views the situation is indeed needed the immediate attention and action by the local and federal government especially from the Ministry of Health. He suggested that in order to clear this overlapping of jurisdiction and duty area, it is better to draw a line to identify the specific role and boundary to clear the matter of overlapping once for all.

They serve to supplement and to fill up the short fall of no health inspectors in the rural areas. The federal inspectors of course have many other important roles and areas to take care so as to save guard the health of the people.