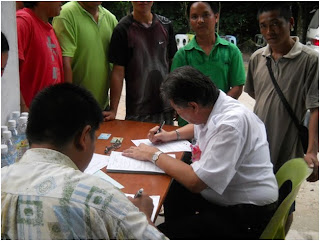 INTERVIEW…. Dr Benjamin Yapp conducting an interview with a rural villager related to the standard of living of the rural folks in the interior of Sabah, Malaysia to comply a report that recorded many rural families in the interior faced many hardships as a result of lack of basic rural infrastructures, inadequate amenities and non-governmental aid for socio-economic development, etc.

SABAH DAP interior mobile service team on July 27, 2011 carried a general public opinion poll in the interior district of Tenom to find out the opinions of the general public concerning the State Government's decision to spend RM335 Million of public fund for the construction of a modern, luxury Sabah Administration centre in the State Capital of Sabah.

Sabah DAP parliamentary Liaison Chief for the Interior, Dr Benjamin Yapp commented that the rural interior of Sabah had been lacking of basic infrastructure development for many decades. The rural roads were in bad shape with many remote areas in the interior were in need of road repairs, maintenance and upgrading.

Many rural areas such as the remote kampungs in Melalap and Kemabong sub-districts were difficultfor commuters and villagers to have proper access to several rural roads and the rural road conditions in several remote areas were impassible for cars, vehicle, and the rural folks had difficulties in moving around from one village to another.

Local Tenom residents complained to Sabah DAP that there were several rural kampungs in and around Tenom Parliamentary constituency that were still very backward without piped water and electricity supply. They were shocked to know that the Government was prepared to build such an expensive Administration centre costing an exorbitant amount of RM335 Million while the rural people had been deprived of basic rural infrastructures and public amenities for so long.

Poverty in many rural areas in the interior was worse than ever before especially with the ever increasing prices of fuel and essential commodities affecting the livelihood of the rural families. Many hard-core poor families among the indigenous races in the interior were living in great hardships while the Government seemed to be extravagant in the spending of public fund without regard to the sufferings of the rural population. 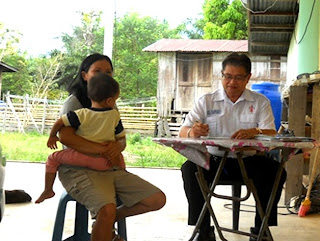 VOLUNTARY…..Dr Benjamin Yapp, offering voluntary services for the rural folks in the interior of Sabah, Malaysia

The rural communities were unhappy with the present Government's decision to waste public fund that would be well spent and utilized for improving the standard of living of the rural communities in the interior of Sabah. The rural people were in a dilemma and that they had been deprived of a better standard of living. Many elders in the rural areas had spent most of their lives in the rural areas without adequate amenities.

Is it fair that public fund should be wasted to build such a luxury, expensive building infrastructure while the rural people suffer in vain?

Sabah DAP urged the Government to reconsider to allocate the Billion of Ringgit for basic rural infrastructure development in the rural interior of Sabah, Malaysia without further delay.