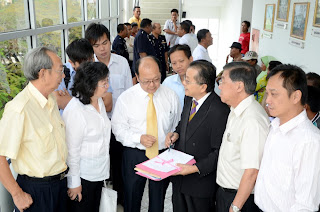 NEXT Hearing on the case of SAPP ‘Sabahtv.net’ signboard is 15th August, 2011. SAPP made an Application to the High Court for Interim Injunction to stop DBKK from dismantling SAPP’s on-line media, ‘Sabahtv.Net.Signboard’.

The High Court of Kota Kinabalu granted DBKK’s request for 14 days to file and serve their ‘Affidavit In Opposition’ opposing the ‘Applicant’s affidavit In Support’ filed on 20th July, 2011 and served on 22nd July 2011 on DBKK. The 14 days period shall begin from 25th July, 2011.

All submissions must be filed and served before 15th August which is the next date for hearing.

DBKK’s counsel gave an undertaking before the court that they shall not dismantle the Applicant’s signboard until the application is heard and ruling delivered by the Court.