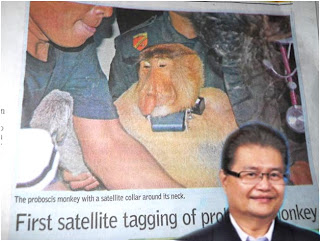 INHUMAN…. How the poor proboscis monkey was fitted with a satellite tag around its neck for life, affecting its natural movement and life-style in its natural habitat. Animal lovers read with dismay and urged the authorities concerned to reconsider using an alternative tiny satellite device instead of such clumsy electronic device that is not conducive for the normal wild life-style and habits of the proboscis monkey in freedom of movements within their natural habitat.

AS A CONCERNED citizen related to cruelty to animals, and wild creatures of Borneo, I read with dismay and absolutely disapproved the manner in which a wild proboscis monkey was treated in an ‘inhuman’ way by way of tagging the wild creature with a clumsy satellite tag tied around its neck for experimental and monitoring the movement of this animal in the wild, while disregarding the natural habits and freedom of movement in its natural habitat.

This is tantamount to ‘cruelty to animals’, including that of the wild animals in the jungles. This poor creature would have to live for the rest of its natural life being tagged around its neck like a prisoner without the proper natural freedom in its movement.

This would affect the animal in many ways.

What the department for wildlife and the management of Danua Girang field centre should have done was to fit an alternative micro chip or, tiny electromagnetic device instead of the clumsy, uncomfortable satellite tag (see picture) around its neck region that could hurt the proboscis monkey and affect its natural movement in its natural habitat.