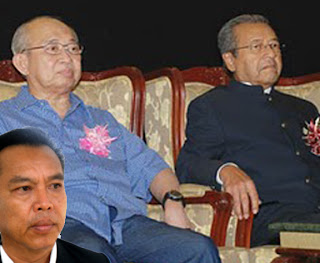 I FEEL it is very exciting that our highly respected veteran leader Tengku Razaleigh Hamzah, popularly known as Ku Li, has already launched his new outfit Angkatan Amanah Merdeka (Amanah) towards nurturing unity as espoused by the country’s founding fathers.

In the midst of our sharp racial divisions at the moment, Amanah said in a statement recently that the group wants ‘to reaffirm, inculcate and re-ignite the sense of togetherness and true family spirit that prevailed among all Malaysians during the time of our common struggle for national independence’.

It also said it wants to rekindle the legacy, promise and ideals of Bapa Malaysia and the founding fathers so that all Malaysians may live together as members of a truly just, fair, progressive, united and happy nation community.

Its other objectives are:

(1) To earnestly acknowledge, affirm and respect the sovereignty of the constituent states of the Malaysian Federation, consistent with the principles of federalism, democratic principles and in the true spirit of the Federal Constitution;

(2) To ensure that our national institutions respect and uphold the rule of law, democratic principles, rights and universal values;

(3) To support a government and administration that is transparent and accountable, truly competent, efficient, free of corruption and cronyism, clean and honest, fair and trustworthy, and that will be fully able to serve its functions and meet its responsibilities, freely and fairly; an administration that will always be mindful of the rights and interests of the people in whose name and cause it is appointed to serve;

(4) To promote the socio-economic well-being of the people, so that all Malaysians may enjoy truly advanced, progressive, fair and equitable lives – individually upholding filial piety and other noble values and collectively joined together in sincere family kinship as members of our national community and as stakeholders in our common national destiny;

(5) To support an economic policy that will help achieve and sustain a high standard of living for the people, based on the principle of justice, fairness and balance, consistent with the constitution and under a stable monetary condition.

In two several papers presented locally and abroad (Shattered hopes and broken dreams and Disenfranchisement of bona-fide Sabahans) I had touched on the sweet promises made by no less than the Father of Malaysia, Tunku Abdul Rahman, who assured us that no colonialisation of any sort will be imposed on Sabah.

At the outset of the formation of this federation, we had dreams of a new age of progress in which we Sabahans and Sarawakians will be enjoying a kind of development that will propel us strongly into the 20th and the 21st centuries, under a government which would be just, with no prejudice against any Malaysian regardless of skin colour and belief.

Sabah and Sarawak would be part of a federation, not a nation, hence retaining their respective nationalities on equal status with Malaya. We were assured of many rights in perpetuity.

But they were not to be. Successive governments and leaders were sweet-talked into surrendering those rights until we are just tools and stooges to federal powers. Through political manipulations and stratagems in the politics of federalism we fell into the traps and ended being what we are today – just one of the 13 states in Malaysia, and the poorest of the lot at that!

In the second paper mentioned above I had listed our disenfranchisements due to so many losses and victimisations:

(1) Loss of right as a national entity,

(2) Loss of rights guaranteed in the 20 Points,

(3) We have been victims of demographic re-engineering,

(4) We have been victims of Kuala Lumpur’s divide-and-rule manipulation,

(5) We have lost the true democratic system,

(6) We have been victims of gerrymandering and the manipulation of the electoral rolls,

(8) Our security has been substantially compromised,

(9) We are losing our land rights,

(11) We are victims of Malay supremacy,

(12) Loss of harmonious and peaceful co-existence.

I then followed up with a list of demands of things that are should have been rightly ours.

What Ku Li’s Amanah can do are many, but what comes immediately to mind is the re-institution of real justice (in all matters including the fair redistribution of wealth and opportunities), liberty, transparency, true democracy, meritocracy, and freedom of the press.

But amanah itself had made an excellent summary of all that need to be done by stating them in its comprehensive list of objectives. If we were to analyse everything mentioned in those objectives it would take a whole thick book.

I have high hopes when reading objective No. 3, which aims for “a government and administration that is transparent and accountable, truly competent, efficient, free of corruption and cronyism, clean and honest, fair and trustworthy, and that will be fully able to serve its functions and meet its responsibilities, freely and fairly”.

We know that because of half a century of abuses, manipulation and instituionalising of corrupt practices into becoming a culture, the very attempt at repairing these damages through such reforms will be a gargantuan task, but we must make the first few steps towards repairing the damages and putting the nation on a path of revival.

The biggest damage has been in the area of race relations. We are now living in an era of interracial and interreligious suspicions and paranoia. We are so far into interracial distrust that we are actually nearing the point when another interracial riot may take place and bring the whole nation down to its knees – no thanks to many bigots and hate mongers like Ibrahim Ali of Perkasa.

The second biggest damage, I believe, is in the area of economic confidence of the people as a result of rampant and unbridled corruption. With these two combined, the effect on the economy has been devastating, resulting in increased poverty and the frightening brain drain. And all these are dragging us deeper and deeper into the abyss. Without any drastic change, even with the so-called transformasi of the Prime Minister, the nation will continue to sink deeper and deeper into trouble.

We need more NGOs like Amanah, UBF, MCLM, CigMa, Bersih and others with similar aims to operate against the BN-sponsored tranformasi and 1Malaysia movements which have the single agenda of keeping BN in power and perpetuating the abuses. With enough pressure, the BN will be brought to heel.

The only acceptable change is to beat BN and change the government. And with a giant like Ku Li making the move even while he is still in Umno, the BN is suffering a double injury. One injury is the stab in the back of BN by Ku Li, and the other is the great damage on the BN when Ku Li reveal all the dirty inside stories.

It is very exciting to read of his speech at the launching of Amanah last Friday during which he said, “I believe at the end of the road that we are taking in these early steps, we will be called upon to make several important decisions for the future of our nation – choices that we must take regardless of the problems, challenges and obstacle that we face. This morning could be another normal social event or it could be the beginning of a journey towards something that has never taken place before, that may change the current of our country’s future.”

Agreed, totally. And truth will prevail. Ku Li will be a major force, with a strong potential to become the leader of the Third Force, and to become the key to the great change we have been dreaming of. Can we dare to foresee him becoming our next PM? After all, politics is the art of the possible, isn’t it?