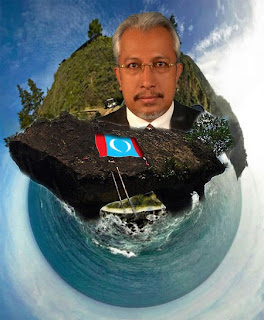 PKR candidate, Ansari Abdullah got a thorough 'cleansing' on the second day of his campaigning when he unexpectedly 'plunged' into waist deep water as the Sandakan jetty to Pulau Api Api caved in.

Together with him was his aide, an NTV7 reporter and the UMNO-Barisan Nasional flag! Then he arrived at Pulau Api Api only to discover that there was no clean drinking water, electricity or secondary school in the fishing community.

"Did you know children in Api-Api don't further their education beyond standard six? We asked three children between 13 and 14 years of age why and they said the ferry fare was too expensive.

"They told us that a one-way ferry ride to town was RM5 and a return trip was RM10. How can fishermen parents affod this on their meagre RM200 to RM300 earnings?

"How can this happen when Sandakan has Sabah Chief Minister, deputy CM and a deputy federal minister," asked Ansari.

Bogged by his history of electoral defeats, Ansari's 'drop' into the sea is read as "not a good sign".

But Ansari, 56, who is Tuaran PKR Chief, shrugged off the 'omen', jesting that he had a 'free cleansing' (mandi junub) session.

"I think it is a good sign for Pakatan Rakyat and bad for UMNO Barisan Nasional, because they had their flag planted there before we came and it fell as well.

"The jetty was rotting so when the three of us got onto the platform it caved in. It just proves Barisan Nasional hasn't done much in Sabah in its 47 years of administration," he quipped.

He urged Sekong BN assemblyman Samsudin Yahya to direct the respective state agencies to examine all the other jetties on the islands in the constituency to ensure public safety and comfort.

Pulau Api-Api is one the many islands within the Batu Sapi parliamentary constituency.

The parliamentary seat fell vacant following the death of incumbent Edmund Chong from Parti Bersatu Sabah (PBS), a Barisan Nasional partner, on Oct 9 in an accident.

Many have already discounted PKR, saying the battle royale is actually between BN and SAPP. Speculations on the blog is that ‘Ansari is a Musa plant' to derail SAPP.

During recent the SAPP lantern festival function, Datuk Yong Teck Lee said and as published in the local newspapers that SAPP is going for Sabah State government as that is their central principle. He even said that SAPP will contest 40 state seats.

He then said that he will work with Pakatan Raykat to help to fight one-to-one basis with BN for the parliamentary seats. Datuk Yong appeared to contradict himself when his party has decided to contest in a by-election for the Parliamentary seat of Batu Sapi, Sandakan. He even claimed that he would talk to PR that PR should support SAPP to contest one-to-one with BN. (FMT)