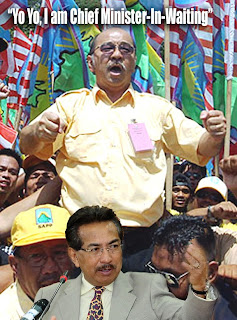 “It is a desperate attempt to grab power. He is a dangerous and an irresponsible leader who says one thing now but when he was in power, he did just the opposite,” Chief Minister Datuk Musa Haji Aman said Saturday.

“This kind of leader cannot be trusted, whether as an MP or State Assemblyman, let alone as he describes himself ‘A Chief Minister-In-Waiting’.

“He can wait all he wants because the people can see through his ploy,” added Musa at a meet-the-people session in Kg Bakau here, this evening, while campaigning for Linda Tsen for the Batu Sapi by-elections.

Musa said Yong is even trying to provoke a war between two nations, in order to achieve his selfish agenda.

“Since he joined politics, he had pitted one person (be it friend or enemy) against another. Today, he tries to provoke a war between Malaysia and Brunei by again raising the issue of ‘Block L & M’, which in fact is a non issue,” he said.

Musa said the ‘Block L & M’ had been adequately explained by the Government since day one when the issue was first raised. There is nothing to hide and there is nothing sinister in this issue.

“These areas rightfully belong to Brunei. Period. If at all there was even a slightest suggestion that ‘Block L & M’ is part of Sabah territorial waters, the government would ensure it remains ours as what it did for the Sipidan and Ligitan issue,” said Musa.

Musa admitted that it was sometimes difficult to explain to the people complex matters and issues, but Yong was only ‘fishing in murky waters’ hoping to play upon the naivety of the people to make it look as if the government of the day was in the wrong.

At the the last Parliament sitting in June, this matter was again adequately addressed by the Foreign Minister, Datuk Seri Anifah Aman.

Citing the interpretation of the law by some well-known maritime experts based on UNCLOS (United Nations Convention on the Law of the Sea) 1982, Anifah said the two oil blocks clearly belong to Brunei. Wisma Putra has also sort legal advice on the matter and established that these 2 blocks indeed belong to Brunei.

He said this in response to a question by Opposition Leader Datuk Seri Anwar Ibrahim (PKR-Permatang Pauh).

Anifah also revealed that Malaysia will have its share on revenue from its oil and gas exploration.

Meanwhile, Musa said Yong was highly mischivious if not ignorant, for suggesting that the MACC had failed to take action against him, over his alleged connection to the group of people who were arrested over alleged ‘money-laundering’ in Hong Kong.

“Yong is neither blind nor deaf to know that the Authorities are doing a full investigation on all these allegations; nothing is being covered up. The Authorities are investigating without fear or favour. Having said that, those who spread rumours should also be dealt with."