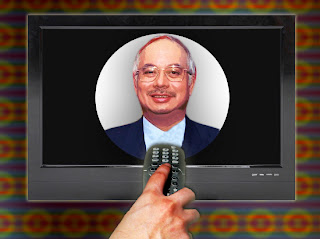 I notice that Datuk Neri Najib Razak has raised some question on whether he is consistent on his 1Malaysia policy when he delivered his address at the on-going Umno general assembly. All this while he had been trying very hard to advance the idea of 1Malaysia, in part to promote mutual understanding and unity among the multi-ethnic Malaysian society, while trying to educate the Malays of the need to cool down the excessive demands for Malay rights and to focus more on accomodating all Malaysians.

But this time he delivered a speech which was very aggressively reasserting the pro-Malay agenda, even giving some sprinkling of sarcasm in his poetic language. When he spoke against racism and extremism I was wondering whether he was hitting at the anti-Malay aggressors or he was hitting at the extremist Malays who keep raising the issue of Malay rights. But it was clear what he had in mind when he restated the Umno’s agenda for the preservation of the social contract which he said should not be questioned.

I guess the tone of the Umno general assembly will always be the same. It will never change. It is also very obvious Umno hasn’t learned anything during its half a century of leadership experience. By the tone of Najib’s speech, it was obvious he is in no mood for multi-racial reconciliation among Malaysians. He quite clearly told us that we should never question Malay rights. The only attempt at reaching out to the whole Malaysian society was to try to convince us that Kadazan, Dayaks and Tamils are Malays. He came short of including the Chinese. But it’s all a hollow reassurance when we realize that although this time there was no weilding of keris, the invisible keris is there.

This is rather saddening because by now Umno should have matured into a party for all Malaysians, not for Malays only. When people complained about Datuk Hishamuddin weilding the keris he said in regret that it was meant as a symbol of protection for all Malaysians. But action speaks louder than words. Non-Malays in the country (KDMs, Dayaks, Chinese, indians and non-Mulim natives) still strongly feel sidelined and discriminated against.

The Borneo natives are still ‘others’ in the nation’s lineup of races. There is still a strong over-dominance of Malays in the civil service, and it is still Malays who are given priority in all aspects of Malaysian life (employment, scholarship, contracts, shares, etc). Umno has not gained the wisdom to rise above it narrow Malay agenda and embrace all Malaysians and poise itself to a position of genuine national leadership. We expected that Najib would be giving a pacifying and reconciliatory speech, to assure us of equality, fairness and unity to strengthen the bonds among Malaysians in the name of 1Malaysia.

But no, the Umno general assembly must be treated as a place for re-declaration of the outdated Malay rights and superiority! In the presence of the leaders of the other BN parties, there is still the excessive parochial Malayism, which gives out the loud and ugly message, “Don’t mess with us, or else!” It makes us wonder, “How is this approach going to gain more votes for BN in the next election?” In the past an MCA leadership left an Umno general assembly saying his feelings were hurt. How did MCA and MIC leaders feel this time?

Also, we shouldn’t miss one important contradition in Najib’s speech. In his recital of Usman Awang’s poem, he declared that “Watak Melayu menolak permusuhan, Setia dan sabar tiada sempadan, Maruah dan agama dihina jangan, Hebat amuknya tak kenal lawan” (The Malay’s character reject enmity, Loyal dan patient without limit, Dignity and religion do not insult, the greatness of amok will not care who the enemy is). In one sentence the Malay’s endless patience and burst to amok are declared, meaning “We are patient, but…” It goes therefore that this is the character of Umno as well, or this is the Malay character that Umno is promoting.

Where is the wisdom, the learned approach to conflicts through intellect and openness? So is Najib encouraging the Malay’s hyper-sensitivity to trivial matters that can lead to riots? I am not accusing; I am just confused.

This reality had also caused me to wonder what one KDM UMNO member doing there in his KDM contume. Wasn’t it ironic that he was there in the face of the excessive pro-Malay speeches reminding all Malaysians of the ultra-Malay agenda, reminding him that his people in Sabah are only side spectators to the larger power plays in Kuala Lumpur? He needs to remember that he may be just a stooge and a proxy, and that no matter how loyal you are in Umno, if you are a not a Malay, you will always be considered a second-class member, especially in the eyes of the Peninsular Umno leaders. John Ghani was there at one time, also wearing his traditional costume, but he learned his hard lessons and left the party.

It was also quite clear that Najib was speaking at the top of his oratory ability, with all his passion, as if he is desperate for something, perhaps for a sudden swing of support for Umno. But did it work to convince enough non-Umno Malays to come (back) to Umno? He also sounded as if he realized he may be speaking for the last time in an Umno assembly before an election in which the BN may most likely lose power.