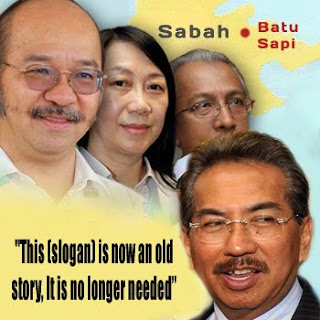 CHIEF Minister Datuk Seri Musa Aman has described Sabah Progressive Party's (SAPP) by-election campaign slogan "Sabah for Sabahan" and "fighting for the return of autonomy for Sabah" as outdated and not in line with the country's aspirations.

Musa said the people, including those in Sabah, are now living in harmony under Malaysia.

Musa said: "We have accepted the fact that we are Malaysians and we must now speak as a Malaysian. Let's not be too parochial."

Musa was speaking to reporters at the Sandakan Airport after seeing off Deputy Prime Minister Tan Sri Muhyiddin Yassin who was here to lead the Barisan Nasional's (BN) camp for the nomination for the Batu Sapi by-election Tuesday.

The by-election on Nov 4 sees a three-way fight between the BN, Parti Keadilan Rakyat (PKR) and SAPP.

On the nomination process Tuesday, Musa said, it went on smoothly. He attributed this to the political maturity among the people here.

He said the BN would deploy its machinery from now on to ensure the seat remain with the coalition.

The by-election is called following the death of its incumbent Datuk Edmund Chong Ket Wah in a road accident on Oct 9. (BERNAMA)