RAKYAT DIUTAMAKAN ‘DOWN THE DRAIN’ 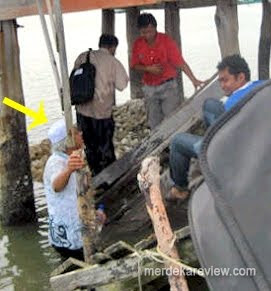 IF anyone still believes that the political tsunami that hit the shores of Malaysia which change the political landscape was a bad omen, it surely doesn't appear so. The popular votes went to Pakatan Rakyat, a coalition of Parti Keadilan Rakyat (PKR), DAP and PAS. Parti Keadilan Rakyat's (PKR) candidate for Batu Sapi, Hj.Ansari Abdullah was today ‘baptized’ after the jetty he was walking on while on his campaign trail collapse, resulting in him and two other aids plunging into the sea at the Sandakan jetty to Pulau Api Api.

If this baptism is of any indication of good things to come, then the people of Batu Sapi will long remember the injury and pain he had to endure for the sake of the people.

Fortunately Ansari escape serious injury and was up again in his campaign which took him to Pulau Api Api. When ask if he was alright, Ansari said, “What would have happen if it was a pregnant woman or children and not me? I dread to imagine the circumstances had that happen and went on to question and cautioned the UMNO/BN assemblyman for Sekong, Samsuddin Yahya and urged Samsudin Yahya to direct the respective state agencies to examine all the other jetties on the islands in the constituency to ensure public safety and comfort.”

I guess the question that Ansari should be asking is, "Where was the allocation to repair the jetty in the first place"? It was reliably learnt that the rakyat had complained to the assemblyman countless times,yet nothing has been done. My question is, must someone perish before action is taken? Where is all this big talk of UMNO/BN about "Rakyat Diutamakan". It should read as "Rakyat Diketepikan"?

How can this happen to Sandakan, when the Chief Minister of Sabah, Deputy Chief Minister and Deputy Federal Minister are all from Sandakan? Musa Aman, Peter Pang and V.K.Liew must come out clean and explain this disaster to the people of Batu Sapi. UMNO/BN is so fond of telling the people that only UMNO/BN can bring development to the people, bring about tragedy is more likely. The empty promises will be remembered by Batu Sapi, all talk and no action.

Sandakan is also home to the largest ‘orang utan’ sanctuary in the world and a heaven for tourist. UMNO/BN has failed Batu Sapi and the people of Batu Sapi will punish UMNO/BN and show them the exit door.

To add salt to injury, I had the opportunity to speak to a lady who had just exited from a Chinese temple and had this to say about the BN candidate, Linda Tsen, "this woman is still in mourning, her husband just passed away, she has no respect for her late husband.”