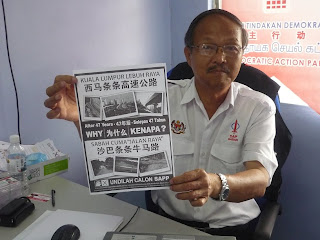 THE leaflets distributed by the President of SAPP Datuk Yong Teck Lee the candidate for the Batu Sapi by-election on the issue of the bad roads in Sabah when compared to the highway in Semananjong, is real enough and tell the story why after 47 years of Malaysia, Sabah is having many bad roads which is only fit for cows and horses.

Dr. Hiew, the Pakatan Rakyat campaign director for the by-election said that Yong is very forgetful that he was in the Barisan Nasional for 5 years during PBS still in BN (1986-90), and then forming SAPP in 1994 till his pull out from BN recently, a total of 20 years in the BN.

He was the Member of Parliament (Gaya), State assemblyman, Minister of Local Government, Finance Minister and even two years as the Sabah Chief Minister under the rotation system.

What actually tell us from his leaflets is that he being a key member in the BN during that time did not fulfill his role as a people’s representative and the inability to wrest assistance and financial aid from his BN bosses in Kuala Lumpur.

Is he telling the people in Batu Sapi that he has nothing to do with the bad roads and Sabah being forgotten by the BN, or rather he is helpless in getting something from his West Malaysian bosses?

We need not remind him that he did praise the BN for bringing plenty of projects and money to Sabah, may be he is forgetful again. We can provide plenty of newspaper cuttings to refresh his memories.

What is the use for the Batu Sapi voters to vote him to allow him to become a Member of Parliament again? Will he be able to bring plenty of good highways to Sabah if he is elected again? The people are not so forgetful and they already know exactly what to do.

The suffering in Sabah is real and all these thanks and no thanks to BN. We are now the poorest state in Malaysia with highest poverty rate, bad infrastructure, low economy growth, and low federal funding in spite of our very high oil and gas contribution and taxes to the national treasury coffer. In the national budget of 2011, a sum of only RM 9.55 billion is allocated to Sabah and Sarawak, only 8% of the whole budget sum.

This is a true indication of ill treatment received from the BN federal all these years. Can we continue to support the BN who don’t even help us? Can Yong bring to Sabah RM billions? This demonstrated his inability even he held top position in the BN, what can he do now?

In Penang, Lim Guan Eng has turned Pulau Pinang into a prosperous place, and its financial achievement in the short two years is highly recommended in the Audit General’s report 2009.