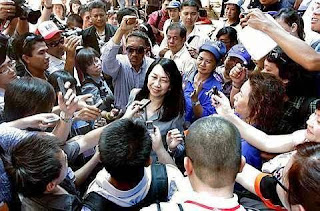 BARISAN Nasional candidate Linda Tsen deftly defended herself for the first time against a volley of accusations by the opposition.

Speaking to reporters, she admitted to being less than proficient in Bahasa Malaysia but said that she was learning the language.

“Every day we have to keep learning, there is no end to it. I am learning to be better in Bahasa,” said Tsen who is in the race for the Batu Sapi parliamentary seat.

The opposition has pounced on her handicap and said it would affect her ability to be an effective parliamentarian for the Batu Sapi electorate as she would be expected to voice out their problems and take part in debates.

Addressing criticism that she is unsuited for a seat in the Dewan Rakyat, she said she would initially have to depend on prepared text to deliver any speech in Parliament.

“That is what most MPs do... I'm not saying that I'm a seasoned politician and can stand up and speak, but I'm willing to work hard,” she said.

For the first time in the campaign which moved into its sixth day ahead of the Nov 4 by-election, Tsen was left to answer questions by reporters on her own after the BN was accused of shielding her from scrutiny.

The housewife and part-time music teacher spoke of her daily routine and how she fortified herself for the torturous election campaign by drinking two bottles of Chicken of Essence as well as getting by with just four hours of sleep a day.

She said one of the issues that concerned her was the unhygienic living conditions of her would-be constituents, pointing to the garbage strewn around.

She also dismissed claims of self-interest in allowing herself to be fielded as a candidate despite still being in mourning over the death of her husband, the late Batu Sapi MP Edmund Chong, barely a month ago in a road accident.

Tsen said that she has moved on.

“During the first week, I could not accept it. But now, I have come to terms with myself that I must be strong. All my children are looking at me. I am their pillar. I have to be strong. I have to accept that he has gone and I must move on,” she said.