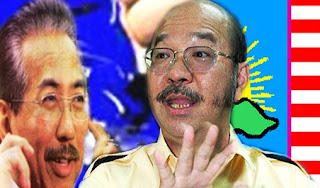 THE Sabah Progressive Party kicked off its second phase of campaigning in the Batu Sapi by-election by challenging Sabah chief Minister Datuk Seri Musa Aman to a debate.

SAPP President and candidate Datuk Yong Teck Lee challenged Musa as head of the state government to a debate at Hakka Association Hall here at noon on Sunday after Musa dismissed SAPP's campaign as outdated.

Yong said: "Sabah autonomy, Sabah for Sabahan is not outdated, but long overdue... I hereby challenge the Chief Minister of Sabah to debate whether the Sabah for Sabahans issue is outdated or not."

The former Sabah Chief Minister told reporters that the "Sabah for Sabahans" and the autonomy issues were still relevant because the spirit of the Malaysia Agreement 1963 should be fully complied with.

On a call by PKR candidate Ansari Abdullah for a debate, Yong said: "Ansari has no locus standi to challenge me. I'm not running away, but he (Ansari) is only head of the Tuaran branch."

Yong said that if PKR wanted to debate, it should involve its top leaders like Datuk Seri Anwar Ibrahim.

Assessing the campaigning which entered its third day today, Yong said he believed Barisan was leading at the moment as the coalition had "some advantages."

At the same press conference, former deputy minister of Rural and Regional Development Abdillah Abdul Hamid announced that he had joined SAPP.

Yong will face Ansari and Barisan's Linda Tsen Thau Lin in the Nov 4 by-election, which follows the death of Datuk Edmund Chong, husband of Linda Tsen, in a road accident on Oct 9.