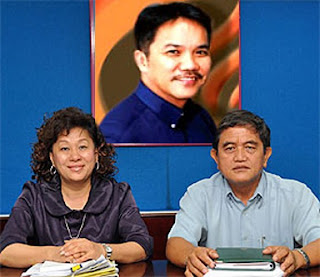 He said the LDP, set up in Tawau 21 years ago, was one of the BN component parties that were getting increasing support from the Chinese community.

However, he said, the LDP would not specify the number of seats that should be allocated to it in the next general election, he told reporters after opening the 21st annual general meeting of the LDP, here Sunday.

"We did not specify the number of seats requested for our party (LDP), this is up to the BN's top leadership," said Liew.

"As a party that has reached the age of 21, the LDP will continue its struggles within the BN for the sake of the community in the state and country.

"That's why we will defend the seats that had been allocated to the LDP in the past election besides requesting for additional seats," he said.

On the disappointment expressed by the LDP Youth wing, which met yesterday, on the allegations and criticisms levelled at the LDP as though the party was in the opposition, Liew said they should be perceived as constructive criticisms to improve the LDP leadership.

The LDP meeting this time involved 927 delegates and observers representing 57 LDP divisions throughout Sabah, including two divisions that were newly set up.(BERNAMA)