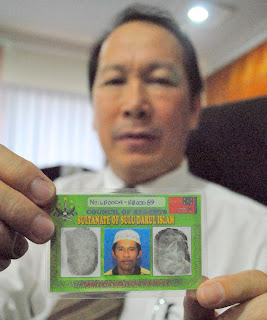 IC….Zulkifli showing the United Tausug People identity card that was seized during the anti illegal immigrants operation on Monday.

The police here made an astonishing find on Monday when they recovered for the first time what was believed to be the personal identification issued by the Sultanate of Sulu.

The laminated green identification card about the size of a Malaysian driving licence was seized from a Filipino migrant worker during a surprise raid conducted at a construction site in Dam Road on Monday. The said identification card was purportedly issued by the ‘Council of Regents of the Sultanate of Sulu Darul Islam’ to the ‘United Tausug People’.

The wordings printed on the back of the card read: “To whom it may concern, the holder of this card is a citizen of the Sultanate of Sulu Darul Islam. Thus he or she is recognized as ‘stateless person’ based on Article 1, Section 1 of the ‘Convention relating to status of stateless persons’, regulated by the United Nation high Commissioner for Human Rights. Entry into force 6th June, 1960.”

Interestingly, a quick search on the Internet found that there was even a website dedicated to the United Tausug People which was also registered on the Facebook.

The hour-long raid on Monday which began at 3.45pm was spearheaded by District Traffic and Public Order Chief, ASP Ali Husin Bin Sahina with the help from district council enforcement unit headed by its Assistance Officer, Aliudin bin Miasin.

District Officer, Haji Zulkifli Haji Nasir when briefed on the maiden finding by Sub Inspector Zakaria Bin Hashim on Wednesday, pointed out that the Malaysian government does not recognize such document, adding that it can’t be use as a legal traveling document by Filipino into Sabah.

He thus advised business operators in the district to be wary of hiring foreigners with such an ID card, stressing that it could land them into trouble later.

It was not immediately known though, on the exact number of migrant workers or stateless people who are carrying such an identification card.

Meanwhile, District Police Chief, Supt Shamsudin bin Mat advised public not to be alarm about the finding, as it does not pose any security threat.

“Our investigation revealed there is no threat or whatsoever to the security of the district, the bearer had simply used it to enter here to make a living. That’s all,” he said.

He also explained that the police operation against illegal immigrants in the district was a routine to maintain a good security for the residents of Lahad Datu.

“It’s normal for police to carry such operations, it has got nothing to do with the finding of such ID card,” he added.

Incidentally, an 18-year-old Bajau youth was detained for further investigation after police noticed that he purposely damaged his MyKad. Police also detained a dozen men and women for screening.