CANDIDATES SILENT ON ISSUE OF ILLEGALS 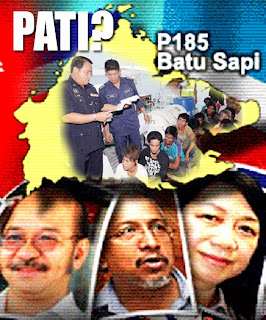 INTERESTINGLY, none of the three candidates in the fray for Batu Sapi; Linda Tsen, Yong Teck Lee and Ansari Abdullah have so far raised the issue of illegal immigrants in their various political ceramah on the campaign trail. Otherwise, this is a hot issue in Sabah.

They are unlikely to do so, and with good reasons, too.

Sabah Umno veteran Karim Ghani, who recently left his party in a huff over the continuing disenfranchisement of local Muslims given the influx of illegal immigrants, thinks that “no politician in Sabah can afford to touch on the issue (illegal immigrants) during elections in more than half the state seats”.

About 5,000 of the Muslim voters in Batu Sapi are in fact illegal immigrants placed on the electoral rolls with MyKads issued via the back door. This is an open secret in the parliamentary constituency.

Not all illegal immigrants have the kind of MyKads which permit them to leave the state. There are those with MyKads which are only good for voting, and nothing else. Such MyKad holders have been routinely turned back at the Kota Kinabalu International Airport whenever they tried to board a plane for Kuala Lumpur or even Miri in Sarawak. The stock answer they receive from the airport authorities:

“Your MyKad is only good for voting.” This causes no end of frustration among the illegal immigrants affected and this could be one reason why they eventually return home by the same routes they used to enter the state illegally.

In reviewing the track record of the various candidates on the issue of illegal immigrants, it can be noted that Sabah Progressive Party (SAPP) president Yong Teck Lee was disqualified in the 1999 Likas election petition after the court ruled that the electoral rolls were riddled with illegal immigrants. Ironically, by that time, Yong had served as chief minister of Sabah for two years, that is, 1996 to 1998.

Batu Sapi PKR division chief, Hassnar Ebrahim, was once held under the Internal Security Act (ISA), followed by two years of house arrest in Sandakan for placing, by his admission, 15,000 illegal immigrants on the electoral rolls with MyKads issued via the backdoor.

Hassnar subsequently told the national news agency Bernama in an interview on Jan 19, 2007, that he was prepared to tell all to the authorities, the police and the courts about the Project IC. There were no takers. He alleged that the other operatives he knows had earlier placed 135,000 illegal immigrants on the electoral rolls.

Hassnar claims that his main worry is that local Sabah Muslims were being systematically disenfranchised by the entry of illegal immigrants and their placement on the electoral rolls with MyKads issued via the backdoor. He has expressed regrets several times in public for his role in the issue of the 15,000 illegal immigrants which has tainted him for life.

Still, de facto party chief Anwar Ibrahim cited Hassnar’s involvement in the MyKads scandal as the main reason why he could not risk fielding him in Batu Sapi. It’s poetic justice that Hassnar, as PKR Batu Sapi division chief, has been found wanting. Any other Batu Sapi division chief would have been the automatic choice to be the Pakatan Rakyat candidate in the parliamentary by-election.

In any case, raising the issue of illegal immigrants in public over the years has not been entirely an exercise in futility for Hassnar. He has grown fabulously wealthy over the years as the ruling Barisan Nasional (BN) has been forced to buy periodic bouts of silence from him on the issue. He cannot be said to be on the take but he has certainly had more than his fair share of business opportunities thrown at him since his ISA days. No one is that lucky in business and all the time.

PKR has also other reasons for raising the issue of illegal immigrants in Batu Sapi.

Anwar himself has been accused of being involved in the Project IC scam, also known more notoriously as Project IC Mahathir, when he headed Sabah Umno before he was sacked in mid-1998 from the federal Cabinet and the party amidst the economic downturn brought about by the 1997 Asian financial crisis. Then Prime Minister Dr Mahathir Mohamad, however, did not publicly refer to the economic downturn but instead accused him of being ‘morally unfit’ to be in government.

Linda Tsen of the Parti Bersatu Sabah (PBS), like the other two candidates, has been forced to remain silent on the issue of illegal immigrants. Any hint from her on this issue risks the certain electoral victory that awaits her on Nov 4. The bookies are already predicting a 3,500-vote majority for her. Yong will come in second, according to them, and Ansari is expected to get less than 2,000 votes.

PBS president Joseph Pairin Kitingan has put the federal government on notice since late last year that he wants the issue of illegal immigrants resolved by the end of 2012. Pairin’s concern is the security, sovereignty and territorial integrity of Sabah. His younger brother, Jeffrey Kitingan, is equally concerned about the disenfranchisement of Sabahans through the continuing influx of illegal immigrants who enter the electoral rolls. He sees his people as eventually becoming internally displaced persons or refugees in their own land.

But SAPP and PKR can raise Pairin’s demand during the campaign but to what purpose? Will it dent Tsen’s chances and better their own? How will it look to Sabahans if both Yong and Ansari suddenly try to appear as great heroes of the illegal immigrants just to garner their votes? They will certainly lose the majority of the votes in the constituency.

DAP, which is eyeing Batu Sapi for the general election, can cause problems for Yong by reminding Sabahans of Likas 1999. This is likely to anger the illegal immigrants who are likely to vent their fury on PKR, the DAP’s Pakatan partner in the fray. This is not likely to bother DAP one bit since it’s no secret that the party wants the BN, through PBS, to win the seat this time. This would make it easier for DAP to claim the seat the next time from PKR.