BATU SAPI PKR NO.2 JOINS UMNO WITH 200 OTHERS 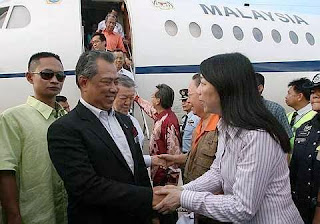 THE Deputy Chief of Parti Keadilan Rakyat’s Batu Sapi division, Amir Bak and 200 other members of the division today quit the party to join Umno.

The division’s Vice Head, Abdullah Madon and seven committee members were also among those who quit.

All them handed over their Umno membership application forms to Umno deputy president Tan Sri Muhyiddin Yassin when the deputy prime minister performed the groundbreaking ceremony for a people’s housing project in Lupak Meluas here.

Besides this, 50 Sabah Progressive Party (SAPP) members from five of its divisions in Batu Sapi also quit SAPP to join Umno while Dr Francis Chong, who contested the Batu Sapi seat as an independent candidate in the 2008 general election, announced that he would be joining Parti Bersatu Sabah (PBS), a BN component party.

The PKR and SAPP members said they were doing so because they had become disillusioned with their respective parties. (BERNAMA)