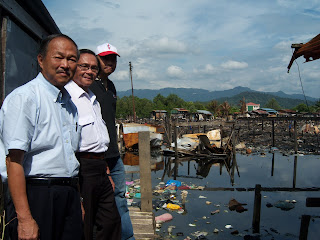 THE fire that burned down many houses in the Kampong Lembaga Padi in Likas, Kota Kinabalu a few days ago causing some many hundreds dwellers in the illegal squatters housing colony to lost their homes and properties. It is lucky that no lives were lost.

Dr. Hiew said that he noticed and was told that all the houses in the whole kampong which are still standing including those were burnt down are marked with the numbers of the PPR counting and registering the units for allocating a unit in government low cost housing in Telipok.

Many of the people here are waiting to be allocated with a unit so that they can move out of the area. They said they have been waiting for quite sometime now. For those who are not lucky enough, their properties are all burnt down to the ground.

It is truly a case where the government had not taken due care for this people in this Kampong, while many are MYcard holders and Sabahan. The delay in the completion of the PPRT housing in Sabah is a fact that is giving the poor people much suffering and difficulties.

The slack work performance and even stop work in some cases on these PPRT housing scheme is a common sight. How can the government promise that there is a house for every one? Another empty promises by the BN.

In Batu Sapi, there are similarly many squatters housing colonies where our local poor people are staying in for many years now, if not for generations. What happen if there is another big fire, whose loss is that, and whose fault and who to blame?

Edward Mujie saw the filthy and filled with rubbish condition of the kampong environment, he said today we are living in the modern era of 2010, yet we see our kampong folks are still living in the dirty surrounding and without proper sanitary facilities. The environment is not fit for people to stay there. The people in such bad living condition are all over Sabah. What is the government doing?

Sabah DAP urges the people tell the BN that they have enough and use their vote in their hand to vote the BN out as one voice in the Batu Sapi By-election and the coming election for Pakatan Rakyat, and do not waste the votes on any other parties or Bebas because these can not bring about a change in the future.