'TOO MANY RESTRICTIONS TO GET LABUAN' 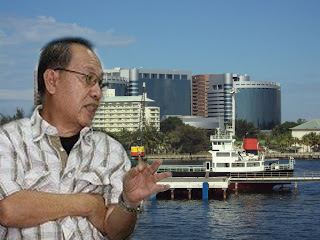 OUTGOING PKR Vice-President Jeffrey Kitingan, just back from a rare visit to Labuan, is shocked that the reality on the ground on the duty-free island is a far cry from that presented in the media.

Labuan is a sleepy hollow with a virtually deserted international airport “and not much traffic on the few roads which lead to nowhere”.

He thinks that the shine, if any, appears to have come off Labuan. He attributes this to “various restrictions” that the international offshore financial centre has been saddled with by administrators in Putrajaya.

“At one time, the thought of visiting Labuan excited people on the mainland and in neighbouring Brunei,” said Jeffrey. “Now, it’s no longer. Prices in Labuan are generally the same as in Kota Kinabalu despite the island’s duty-free status.”

People from Brunei, who used to flock to the island to take the AirAsia flight to Kuala Lumpur, are no longer doing so ever since the airline started direct Bandar Seri Begawan-Kuala Lumpur flights, he noted. “The taxi drivers in particular and the shopping malls are feeling the pinch.”

Meanwhile, smuggling between Labuan and Sabah has deterred mainlanders visiting the island for the cheap booze, tobacco and chocolates. There are also allegations that Labuan has become a transit point in the region for people smuggling, human trafficking, white slavery and prostitution.

The way forward, Jeffrey opines, would be to allow Labuan to be self-administered just like other offshore tax havens circling the globe in competition.

“Tax havens should have a high degree of autonomy to maintain their credibility in the global world of finance,” says Jeffrey. “The moment politics enters the picture, economics flies out the window.”

The federal government, said Jeffrey, should confine itself to ensuring the security of Labuan and otherwise leave the island alone. This would mean beefing up the naval presence on the island to supplement and complement the submarine base at Sepanggar on the mainland, a deterrent aerial presence and a bigger role for the marine police and coastguard.

He clarified that he had no dealings whatsoever or interest in Labuan and was there to visit PKR members who come under the Sabah chapter. He has taken two months leave from the party and will resume duties next year.

He acknowledges that Labuan being self-administered would not be possible as long as the island was merely used as a post box and the actual physical dealings in international finance are conducted in Kuala Lumpur. He does not see this duplicity happening in any other tax haven elsewhere in the world. He added that in this case Labuan sticks out like a sore thumb in the world of high finance.

He suggests a two-pronged process under which Labuan would first function truly as a tax haven with none of its related activities done in Kuala Lumpur or elsewhere in the country. The first prong, when it matures, should give way to the second prong under which the island would be self-administered, he says.

As an immediate measure, the Sabah strongman sees the need for improved air and sea connectivity between Labuan and the mainland and thereafter with the region and the world.

“There are only limited air links between Labuan, Kota Kinabalu and Kuala Lumpur,” said Jeffrey. “The ferry services are appalling and take too long, over three hours, for an air trip of just under 25 minutes with the mainland, Bandar Seri Begawan or Miri.”

To bring down the cost of air trips, Labuan-KK-Labuan being as expensive as Labuan-KL-Labuan, one idea is that seaplane services be introduced by a company like AirAsia, he urged. “At present, Malaysia Airlines keeps AirAsia out of the Labuan-KK-Labuan sector and slaughters the air commuters at will since they now have a monopoly of the air corridor.”

The long-proposed bridge to connect Labuan with Menumbuk, directly opposite on the Sabah mainland, is seen as a virtual lifeline for the island. “The bridge will create a win-win situation for both Labuan and Sabah,” said Jeffrey. “When the bridge is built, it will boost the marine, tourism, oil and gas industries on the island.”

The bridge means, he reckons, more employment and business opportunities for a bigger population which can come from the mainland, Sarawak and elsewhere in Malaysia “since there are no immigration restrictions”.

Jeffrey’s call for Labuan to be self-administered appears to be an attempt to ditch the baggage of the past and move on for the benefit of not only Labuan but Sabah.

The handover of Labuan to the federal government in 1984 by the then Berjaya administration under chief minister Harris Salleh was one of the factors that led to the 45-day-old Parti Bersatu Sabah (PBS) seizing the reins of power in Kota Kinabalu in 1985. Jeffrey co-founded PBS along with his elder brother Joseph Pairin Kitingan who went on to become chief minister for an unprecedented four terms. The brothers have ever since called for the return of Labuan to Sabah.

Labuanites are still considered Sabahans and there are no immigration restrictions between the island and the state. This is unlike the restrictions in place between Sabah on the one hand and Sarawak and Peninsular Malaysia on the other. Sarawakians, however, can freely enter and reside in Sabah with no restrictions whatsoever except if they want to work.