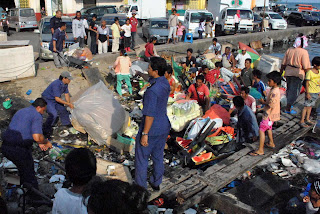 SWOOP…Enforcement personnel swoop on the illegal hawkers during the operations carried out at the market on Monday.

THE police here had intensified its joint operations with the District Council enforcement unit against illegal hawkers and illegal immigrants.

This was following last Thursday’s incident where a suspected ringleader of a pirated VCD and contraband cigarette gestured a ‘trigger-pulling’ hand sign on the District Council Enforcement Unit Assistance Chief, Aliudin Maisin, while carrying out anti illegal hawker operation at the central market on that morning.

Last Friday and Monday operations concentrated mainly at the central and wet market here, which resulted in 684 kg of vegetables and fruits being confiscated, while a large amount of smuggled cigarettes hidden inside locked small wooden stalls were also found, and a dozen of people including contraband cigarette peddlers, were arrested.

The two-day operations however failed to make arrest on any pirated VCD peddlers, as they managed to flee upon realizing the present of police. Last Friday’s operation which started at 2.30 pm caught many by surprise.

To prevent illegal hawkers from returning and start their illegal activities, the enforcement unit personnel also took away tables, chairs, umbrella and push carts that were abandoned by the fleeing illegal hawkers.

In the Monday operations which also begun at 2.30pm, it was noticed that the number of illegal hawkers operating at the market compound had reduced significantly. But an inspection on the fish market and dry market uncovered hundreds of packs of smuggle cigarette hid inside a locked wooden stall.

Several peddlers of contraband cigarette from Philippine were arrested by the plain cloth policemen, after dozen of various such cigarettes were found in their bags. 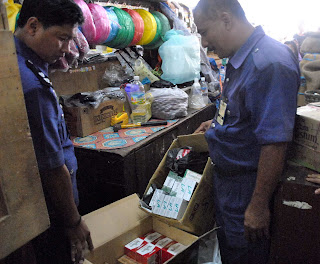 CONTRABAND….Aliudin (left) and his colleague, Asbe uncovered cartons of contraband cigarettes from a wooden stall in the dry market.

The police also assisted the Council enforcement unit in its operations against the illegal immigrants at Dam road at 3.45 pm, before returning to the central market for second round of illegal hawkers operation at 5 pm and it ended at 6pm.

Head of District Traffic and Pubic Order, ASP Ali Husin Bin Sahina when met at the scene said police will not tolerate anyone threatening civil servant from carrying out his duty.

“We will continue to carry such operation, the message is clear, we want them to respect and obey our law,” he stressed. Ali Husin also explained that last Thursday police did dispatched two MPV with six men to assist in the Council’s operation, but unfortunately the timing wasn’t well synchronized, with the Council enforcement unit arrived at the market five minutes earlier and conducted their operation without police’s assistance, resulting in the intimidation by the said pirated VCD ringleader, who was later arrested by the police.

“We are improving our strategy, hopefully both parties can arrive at the target area the same time in the future to avoid such incident from occurring,” he added.