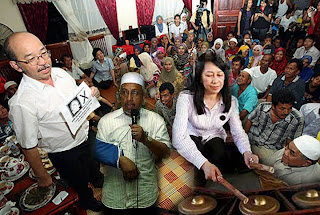 ASSUMING a low 60 per cent voter turnout, I am giving half the Chinese voter turnout of 8,000 in Batu Sapi to SAPP and the balance equally divided between BN and PKR. In fact, the Chinese would overwhelmingly vote for only two parties i.e. BN and one opposition party which is not likely to get more than half their votes.

I am giving half the Muslim voter turnout of 7,000 to BN and the balance equally divided between SAPP and PKR. This would be a really bad performance for BN and good for SAPP and PKR.

Between BN and SAPP, it's more likely that Batu Sapi would go to BN. Assuming that we don't touch SAPP's Muslim votes, how well BN does in Batu Sapi would depend on how badly PKR does. That PKR would not only lose but come in third is certain.