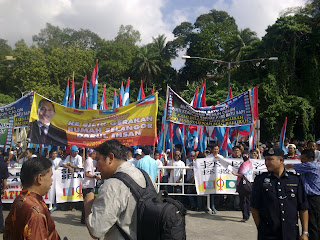 THE stage is set and the dust has settled, for the first by-election or ‘buy-election’ in Batu Sapi, Sandakan, Sabah. As expected it will be a three corner fight, Hj.Ansari Abdullah of Parti Keadilan Rakyat (PKR) Pakatan Rakyat, Linda Tsen of Parti Bersatu Sabah (PBS) Barisan Nasional and Yong Teck Lee of Sabah Action Progressive Parti (SAPP). Will the late Edmond Chong leave behind a legacy to the people of Batu Sapi, we shall know on the November 4th 2010.

With his wife Linda Tsen as the candidate for Barisan Nasional, PBS is once again rekindling back the sympathetic ‘minta-kasihan’ support they once enjoyed during their era in 1985, only to be remembered as demonic to the might of Parti Berjaya. With society having shaken off their ignorance and fully politically matured, a disaster is imminently forthcoming. The walkout by PBS Muslim members that took place at their operation centre is testimony that all is not well in Barisan Nasional. The 500 disgruntled PBS Muslim members that stormed in the centre, shook the day lights of Musa Aman, Pairin Kitingan and other assemblyman. Deputy Prime Minister, Muhyiddin Yassin tried hard to hide his dissatisfaction upon hearing on what had happen, only to say at the end of it all, BN's victory is vital.

On the eve of nomination, while taking a break over tea with some journalist, UPKO's Supreme Council Member, James Ligunjang join me and had this to tell me, "BN has no chance in Batu Sapi". Across my table then came along Sebatik's former assemblyman from UMNO and greeted me. His parting words on the chances of BN "not so good". As ironic as it may sound, it came as no surprise to me. UMNO/BN is well aware that they have lost Batu Sapi.

The faction group of Shafie Apdal and Musa Aman fiasco and a third force within UMNO has emerged once again, this time with renewed energy and destined to exit Musa Aman for good,may result in one of the dirtiest ousting of a Chief Minister. For Musa Aman, this could well be ‘sai-lang’ for him, as his position is now being further treathen by party stalwarts. As the Director Of Elections for UMNO/BN, a lost could well be his exit, something that most UMNO leaders and members will surely be celebrating.

With all the on-going grouses in UMNO/BN, the one thing we can agree here is that UMNO/BN is about to self destruct and Batu Sapi will well be their downfall. Nonetheless the gates of the nomination centre was open today, filled with colour, shouts of reformasi, Sabah Sabah and BN tetap menang (sure win) was heard from afar. Parti Keadilan Rakyat's (PKR) grand entrance started with their 1 km walk from their operation centre to the Dewan Masyarakat Sandakan (Community Hall), as early as 8.30am, and led by the party's candidate Hj.Ansari Abdullah, Party President Datin Seri Wan Azizah, National and State Leaders and more than 1,000 highly charged members and supporters. 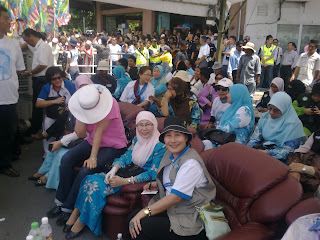 With PKR and Barisan Nasional, having the most number of members and supporters present at the nomination centre, SAPP on the other hand had the smallest entourage. But what was most noticeable, was the presence of UMNO/BN and SAPP members and supporters finding the tent of PKR more conducive. If this is by anyway an early indication on PKR's march to Putrajaya, then their presence in seeking refuge in PKR'S tent maybe a good omen. My congratulations though to the Police and the Election Commission in handling the nomination well.

Nevertheless, 25,582 registered voters in Batu Sapi of which 59.02% comprises of Muslim Bumiputra, 38.06% Chinese, 2.69% Non-Muslim Bumiputra and 0.22% others, will decide their faith and who they prefer to send to Parliament. Generally this is a predominately Muslim constituency and PKR's Ansari Abdullah may hold a better edge over the rest. Sandakan is desperately in need of a vocal and gallant Parliamentarian to voice the voices of Batu Sapi.

For two terms under UMNO/BN, the people of Batu Sapi had to endure sufferings unbecoming of a ‘so-called’ urban developing town. What irks them the most is, the Chief Minister of Sabah,Musa Aman, the Deputy Chief Minister Peter Pang and a Deputy Federal Minister V.K.Liew are either Assemblyman or Member of Parliament in Sandakan, yet Sandakan is plaque with severe utility and economic problems,hence resulting in many leaving to seek greener pastures elsewhere.

Batu Sapi cannot and should not send a deaf, dumb and blind person to Parliament. The endless promises of UMNO/BN is still being promised, yet no improvement in the people's plight and problems has been addressed and dealt with. SAPP on the other hand has two Member of Parliament, yet their voices are nowhere to be heard, and an additional one is not going to make any difference. Being an ‘Opposition of an Opposition’ has no locus standi, worst off the Sabah for Sabahan is slowly but surely evaporating. The young and new generation are not at all interested in ‘kampong politics’, they are more far sighted and understand the overall Malaysian agenda. Politicians or ‘pollute-ticians’ sometimes say the darn est things and old school politics is surely unacceptable

With 9 days of campaigning commencing today, the sleepy and hollow town of Batu Sapi will awake at least until a new and vibrant Member of Parliament emergence on the 4th November. The people of Batu Sapi must vote wisely, for the future of Batu Sapi depends very much who they vote come polling day. Batu Sapi must not live to dread the day when their grand children question them, on why when they had the chance to make a CHANGE, they chose not to.

Having said that, Batu Sapi may trigger a snap elections, and Najib may well take this opportunity to gauge his strength or before his Deputy does a coup to oust him.