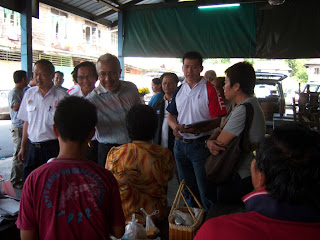 The Sabah DAP campaign team with the partners in PKR and PAS had made a head start in its campaign.

Today early in the morning 7am, the team gathered at the Pasar Tanah Merah in Batu Sapi to begin its campaign to seek support. They explained to the voters here on why they should vote Pakatan Rakyat which is represented by PKR’s candidate Lawyaer Ansari Abdullah, who was announced by the PR leadership on Sunday. They later moved to the Pasar Bandar Ramai Ramai, where they stayed for two hours before moving on to Taman Indah.

The overall respond from the public is encouraging and the Pakatan Rakyat team had listened to various comments and taken note. The general public is of view that they will concentrate their votes and will not fall into a “vote splitting trap” purposely created to help Barisan Nasional win. The voters are sensible enough to decide what is best for them in Batu Sapi, and this is the chance for them to express their feeling on their suffering and hardship faced.

Dr. Hiew had spoken to many on the street and in the market and had found out that it is of opinion that the people in Sandakan all this while had been neglected by the government on their basic needs, infrastructure and amenities, which had created much suffering and hardship in Sandakan which was once a prosperous town called ‘Little Hong Kong’ during the past.

One old man said his children had moved out and staying in KK and some migrated to oversea. The BN’s ruling in Sabah had brought not only slack economy and they can’t even solve the poverty in urban towns. In Batu Sapi itself, there are lots of poor people claimed an elderly woman in the market.