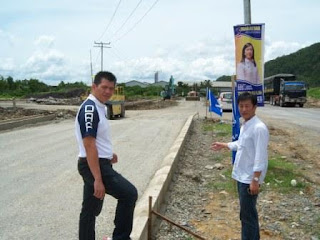 DURING the campaign visiting in Batu Sapi, the Sabah DAP team received many complaints from the people here about the widening and extension work on the Jalan Batu Sapi. They said that the work is so slow and is almost in a stop work stage.

Sabah DAP Batu Sapi Chief George Hiew Vun Zin went to inspect the site and found there are no workers and only a few excavators there. The work is so slow and causing a lot of traffic jam problem and the road surface is dirty. It makes it very dangerous to travel on this road and especially during the night time. Many accidents had occurred and the people don’t like to travel on this road because there is no street light.

George Hiew said it is not sure when this road will actually be completed and may be it will never be finished in a few years time. It has been a year now and we do not see much progress there. The work starts and stopped, and it looks the contractor is in trouble to carry out the job. Why JKR did not take action to make the contractor to speed up the work, and make the contractor to increase his machines and work force. May be this is a ‘political job’ the JKR cannot ‘push too hard’ on them.

This demonstrated the slackness in the BN administration and management of government projects. Long delay, slow progress, no payment and even stopped work are a common sight in Sabah. How can we trust BN to continue to manage and run Sabah, the simple project work also do well, and what about bringing in wealth and well being for the Sabahan.

During the Batu Sapi campaign walk about, we often hear complaints and grievances from the people in the area. They told the DAP about their hardship, difficulties and sufferings. No water, electricity and bad roads are the main complaints, besides the bad economy and unemployment. Some civil servants even complaint the non-payment of government bonus of RM500.00 this year.