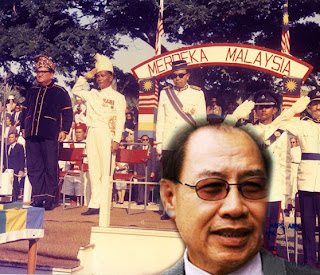 THE BORNEO Heritage Foundation’s United Borneo Front (UBF) leadership applauded the decision by PBS and UPKO to enter into a historic confederation to address common interests in Sabah and pledged their support and assistance to the initiative.

The UBF hails as ‘the first time in Sabah’s political history that we are heading towards an amalgamation of like minds so that leaders born and bred in Sabah can rise to the challenge of securing our political autonomy in the spirit of what our forefathers would have wanted before signing the Malaysia Agreement in 1963. This is the beginning of the political reality of Borneonisation and the implementation of the Borneo Agenda.’

Datuk Dr. Jeffrey Kitingan, the Chairman and founder of UBF, added that the State Government of Sabah and Sarawak have tremendous powers in law to demand for greater State autonomy.

It is past political leaders who have become dependent on Federal/KL leaders and allowed their voices to be ‘stamped by the powerful foot of Federalism’.

“We must rise up to the challenge of harnessing the powers that we have as entrenched in the Inter-Governmental Committee Report of 1962 and Article 8 of the Malaysia Agreement. Our leaders must see the logic of amalgamation to demand for the restoration of agreed rights and protections.

“There is no better time as we are now in a unique position to make these demands to a parliament that hangs divided between the BN and PR alliances. If they don’t hang 50-50, Borneo is finished because we only have 25% of our leaders sitting in parliament,” said Jeffrey to a crowd of over 100 people in a UBF Borneo Tea Party held at Kg. Bukid Rantai, Kota Belud on Tuesday, organised by UBF supporter, Maslan Maginda.

He added, “We pledge our support to both PBS and UPKO on this important initiative and as a non-partisan NGO would like to join them as a neutral voice by assisting in the operationalization of this confederation.

“The UBF also believes that the confederation should transcend party barriers of the Federal alliances and that Borneo based parties from both the BN and PR front be allowed to contribute their views and terms of references when setting out the framework for addressing common interests and problems in Sabah.”

The Borneo Heritage Foundation will be organising another forum this year to address common interest issues and will invite the confederation and other Borneo based parties to participate in the discussion.

“I will approach leaders of various parties to support the confederation and our UBF co-founder and adviser, Nilakrisna James, together with our UBF team of advisers, will draw up UBF’s suggested terms of reference for the various areas of the Borneo Agenda that forms the basis of identifying the core problems and the legal framework that could resolve these problems.

“Our answer lies in the documents that were drawn up with Great Britain prior to the formation of Malaysia. Those legal documents are the basis of Borneo’s power in this country and both Nila and myself are ready to discuss these legalities with Borneo’s political leaders.”