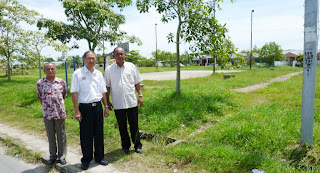 LAST WEEK the KK MP Hiew King Cheu was brought in to view the awful state of the Taman Pasir Puteh playground in Putatan which is just in front of the Complex Belia dan Sukan here.

The resident here said they cannot make use of the playground and field because most of the facilities here are spoiled and the grass had not been cut for a long time. The street lights and the lights on the basket ball court are out of order.

The children playground equipment is damaged and couldn’t be used anymore. It is dangerous for the children to play here because they might be hurt anytime. The people here said that they have seen snakes hiding in the long grass and they worry that the children can be bitten.

The sheds here are near collapse and needed some immediate repair to the columns and roof.

The resident urges the Putatan Council to immediately come to rectify the facilities and cut the grass here regularly without further delay. They said it is their playground and they are rates payers. Why should they pay rates on house assessment and do not get the service in return.

Besides, the people here also made complaint on the street lights which are out of order many years in the Taman Pasir Puteh housing area. It is very dark at night and their security is threatened.

Hiew was accompanied by the PKR Putatan branch secretary Mohd. Hasnan and the DAP member Chew How Chee who lives in the Taman Pasir Puteh. Hiew said this playground should receive regular maintenance by the Council because this is a place for the people during their leisure hour and for their exercise.

Taman Pasir Puteh is a densely populated housing area and the padang is important to them. What is the use having a big field and children playground and yet the people cannot make use of?