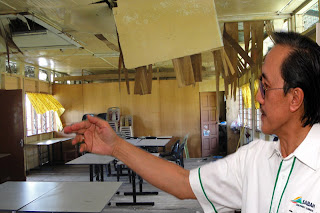 DAP Sabah supports call to leave the Sabah own Educational development to Sabah. DAP also calls for the re-instatement of the Ministry of Education in Sabah.

Junz Wong who is DAP Sabah Assistant Secretary echoed the call by Tourism, Culture and Environment Minister, Datuk Masidi Manjun to give more power to the Sabah Education Department.

Junz said the Sabah Education Department must have the power to decide and implement projects to develop the State's education system especially in training and in the recruitment of teachers.

Junz added he has received feedbacks that many school buildings are in need of repair and renovation but the remedial and improvement works are unable to be carried out unless Putrajaya is consulted.

Even trivial matters will need a nod from Putrajaya he said. Thus It is pertinent that Sabah needs to re-instate the Sabah Ministry of Education to ensure prompt actions and consistent development to the Sabah Education system.

Junz Wong, who is also DAP Sabah KK Youth Chief calls on Education Minister and Deputy Prime Minister Tan Sri Muhyiddin to re-instate the Education Ministry powers not just for the autonomy but also for effectiveness and efficiency to better promote educational interest in Sabah.

Sabah has had a Ministry of Education in the early years of independence so there is no reason why the Federal government is against the re-instatement of the Ministry if such move can enhance the education in Sabah, Junz concluded.