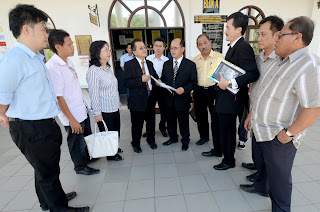 FILLING After filing the Writ of Summons on DBKK at the High Court of Kota Kinabalu, Datuk Richard Yong, secretary-general of SAPP speaking to counsels Peter Marajin and Ken Yong together with other party leaders.

YESTERDAY, SAPP served a Writ of Summons on DBKK which tried to take down SAPP’s Sabahtv.net signboard at SAPP’s premises at Bornion Commercial Centre, Luyang on the 9th of July and later again on the 11th July this year.

Our case is that the Kota Kinabalu Municipal Council (Advertisement) By-laws 1983 if rightly interpreted do not apply to non-commercial entities.

‘Signboard’ means any board which displays the name or the registered trade mark of any person, firm, corporation or organisation and the nature of the trade, business or profession carried on by such person, firm, corporation, organisation and which is visible from any street or public place and which is fixed to or painted on the façade or street frontage of or in the actual building where such trade, business or profession is carried on but not on side walls, fences or open spaces between the street and the said building.

NGOs, societies registered under the Society Act, schools, government departments, religious bodies and political parties which are non-commercial or non-profitable organizations need not apply for licence from DBKK so long as long as their signboards are safe and contain no words that are prohibited by laws.

Sabahtv.net is an on-line radio which is non-commercial and non-profitable. Its signboard is safe and the words ‘Bersih, Berani dan Benar’ are not prohibited by the laws of Malaysia.

Our case is with the Court now and we do not expect DBKK to act on our signboard before the case is fully disposed of. The Court has fixed a hearing on 25th July 2011 at 9 a.m. at the High Court Kota Kinabalu.

SAPP is doing this not just for SAPP, but more importantly is to put things right.

We are seeking a clear ruling from the Court so that the people of Kota Kinabalu will no longer need to worry if one day a DBKK officer come up to your office tell you to dismantle your organisation’s signboard immediately.

The DBKK’s action on SAPP was very harsh, unexpected and totally uncalled for. This is not the way to treat people of Sabah. It is not surprise that such action is being seen as political harassment, selective persecution and political oppression.

Forcefully taking down, and instruction to change or take down signboards happened a long time ago in the 1970s. The government that ordered for such action was toppled by the people soon after.

The people know their rights and where they stand.

We believe Justice will prevail.

And we sincerely thank all the people who have been concerned and supported SAPP and SAPP will always stand by the people.