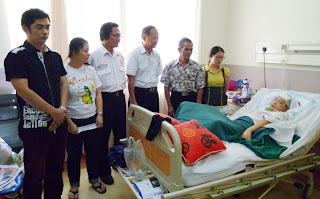 EMPATHY….Hiew and Edward with the Loi Family in the patient. Loi’s father is second from left.

THE RECENT incident of a kindergarten teacher, Loi Ik Thai who was knocked down by a no-parking sign board pole in Damai Kota Kinabalu City. She is still unconscious but there is some sign of improvement on her critical injured condition after the head surgery.

Sabah DAP Kota Kinabalu Member of Parliament Hiew King Cheu and vice chairman Edward Ewol Mujie today visited her in the SMC ward and was informed of her condition by the family.

Her father, Loi Teck Onn explained to them on her improvement on her head injury, and he is very worry on the slow improvement. He is also very concern about the medical bills which had become very difficult for the family to make payment.

According to the father, since she was admitted to the SMC three weeks ago, the bills at the moment is well over RM100,000. The amount is definitely very hard for the family to shoulder. So far her insurance had paid RM50,000; the Kindergarten RM20,000 and their own money Rm10,000 over, but there is still many other fees and bills to settle. They are indeed needed fast help.

The family appealed to Hiew that they would be very much appreciated to receive help from the general public to raise some fund to help them to bridge over this difficult time, especially any possible future unforeseeable hardship until her full recovery from the serious head injury.

KK MP Hiew appealed to the kind hearted people who wish to help to donate some money to assist this teacher to pay for her mounting medical bills in the SMC. You can bank in the money that you wish to donate directly to the father’s account in Public Bank Berhad, account number 4-6134856-02, under the name of LOI TECK ONN.

At the mean time, MP Hiew has written to the hospital asking them to allow the family to settle their bills on a later date.