WHY SABAHAN ARE NOT TRAINED AS DOCTORS? 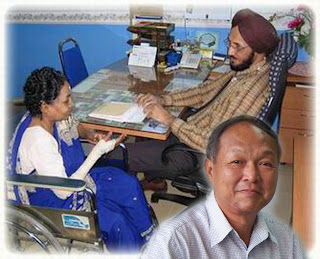 THE RECENT visit to Sabah by the Director General of the Ministry of Health Dato’ Dr Hassan Abdul Rahman, he said there are some 2,000 vacancies for doctors and the medical resources here is at least 15 years lagging behind when compared with West Malaysia. His words actually telling us in the real fact that there is a shortage of 2,000 doctors in Sabah.

The Sabah Director of Health Dr Mohd Yusof Hj Ibrahim also revealed that the doctor to population ratio in Sabah is one to 2000 while the national ratio is one to 600. The national target is to achieve one doctor to 400 people by year 2020.

KK MP Hiew King Cheu said the figures reflected that Sabah has been deprived on the equal right to enjoy good medical services and the Sabahan. In Sabah the doctor to population is actually one to 2480 and in KL it is only one to 348.

This already demonstrated the serious shortage and differences. Why is this problem on the doctors shortage persisted in Sabah? Is Sabahan not so important and can be easily bullied? The basic equal right of the Sabahan under Malaysia is basically being eroded and deprived of.

They informed that there are some 6,000 housemen under training in the various hospitals and once they completed their training they will be sent to serve in the hospital. There will be many of these new doctors to be sent to Sabah.

The question is how many of these young doctors are actually Sabahan? Are the Sabahan not qualified and good enough to be trained as doctors? Why Sabahan who process good result in their exam when they applied to get on to the training program they were normally rejected?

The student now has to pay high fees and expenses to take up courses in oversea countries, like Russia and others. Why can’t the government allowed more Sabahan to be trained as doctors in our institutions here? In fact the Sabahan are to be given assistance and even scholarship plan to complete their study and training.

In the Sabah hospitals there are actually not many Sabahan doctors especially the specialist doctors. Some serious case of sickness had to be transfer to KL hospitals and many lives were lost due to late treatment and operation.

Do we have to wait for the government to come up with a plan to train enough doctors from West Malaysia to serve in Sabah? If the government had taken the matter seriously during the past many decades to train and produce Sabahan doctors, today we will have no such serious shortage of doctors. This again demonstrated the inefficiency and bad planning of the government. They have total ignored the well being of the Sabahan.

In Sabah, we have many good smart people who can be trained as medical doctors and personnel, but when they applied for the training they were always being turned down and rejected. Why is the West Malaysian who are having lower standard can easily get into the training program.

Is this a discrimination, and purposely done to deprive the rights of the Sabahan? This is something that the Sabahan should consider whether they are getting a fair deal. Where do we stand on this particular issue and where are we heading to? Are we the ‘second class Malaysian’? What are our elected people representatives going to do about this, or they are going to keep quiet in order to protect their own future?

Through this simple case of doctor shortage in Sabah, Sabahan should wake up to make their decision during the next general election to whether allow the BN to continue to suppress the Sabahan’s right to a better future.