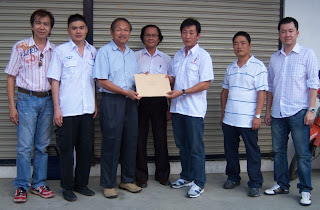 SABAH DAP has successfully installed a new committee in its Petagas branch with Allen Chieng Yew Kong, a young professional as its Branch Chairman.

The Petagas branch is one of the many Sabah DAP branches led by young people, and this is the program in DAP to allow younger generation to undertake more active role in politic and in the nation building.

Sabah DAP provides political training to the young people because we hope to make them aware that the politic in Malaysia is affecting their future and their livelihood, said Dr. Hiew King Cheu the Sabah DAP State Chairman in welcoming Allen Chieng.

Allen Chieng in his short address after handing over the forms on the line up of the branch committee said that he is happy to receive the support from the Sabah DAP leadership and thanks the party in entrusting him and his members with the responsibility to manage the Petagas branch.

He pledged to work hard for the Petagas community and serve with his best ability. He also expresses his will to stand by to uphold the principle to achieve freedom, democracy, equality, and peace. He being a young entrepreneur wishes to spend more time in politic and wishes other young people should follow his foot step to be involved.

This can also enlarge the little circle that we live in daily. The understanding on the direction of the country and its current trend is of vital importance to the future of the youth in the country and the eventual effects.

Allen said the way to do all these is to get involved and the best choice is to be with the DAP, a party with a long proven records of 43 years being a political that remains clean and straight. The DAP is a people’s party who serves without asking for rewards, and a simple thank you and appreciation will make us work harder.

He hopes more young people and those who wish to help to build a fair, clean and straight government to join the party and offer your service. He can be contacted at 016-8346266.