THANKS GIVING DINNER FOR SABAH DAP 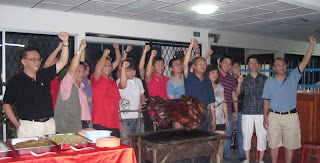 The dinner was arranged not only to foster a closer tie between the youth members and at the same time expressing the gratitude on their excellent performance in the by-election campaign work. Dr. Hiew said even though they were all the ‘first timers’ in an election, but with their intelligence, strict discipline, determination and hard work devoted in the by-election campaign work had already proven that the young people can do it and did well too.

They have gained great experiences and harvested the valuable knowledge of an election, and this is exactly what the DAP wish to achieve. We will continue to train more young DAPs to enforce our strength in Sabah. The training program shall go on extensively throughout the branches in Sabah.

The dinner was also attended by the Sabah DAP state leaders like Vice chairman Edward Ewol Mujie, Treasurer Fred Fung Kong Win, Publicity secretary Dr. Edwin Bosi, IT chief John Lee Kim Seng and other senior members. The delicacy for the night was a big ‘barbecued goat’ and with the serving of other tasty dishes.