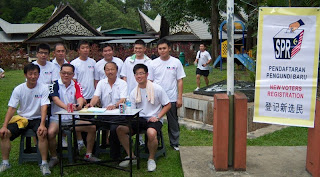 SABAH DAP Kota Kinabalu Parliamentary youth team conducted a 'jogging' campaign exercise and set up a counter for the new voter registration in Bukit Padang Tun Fuad Park yesterday afternoon until evening. The event was carried out by a team of 15 youth members from the KK Parliamentary youth under the supervision of its chief Wong Hon Junz and his deputy Henry Shim.

Wong Hon Junz said that it is equally important that the youth nowadays must engage in physical exercises to ensure the good healthy living and do away with the bad habits of sitting in front of the computers and TV the whole day. The fitness of the body is much needed by everyone and that is the essential part to produce good performance in daily life. He said he will ensure his youth team will continue to introduce more programs to bring up the awareness of exercise and heath among the younger generation.

The 'jogging' campaign was successful and some thirty young voters were registered to become a voter in the next election. Wong felt that there is a need that young people should know more about politic especially this will have a direct impact and affecting the livelihood of the young people.

They should get to know what is the current trend of the political scenario and direction of the country. It is their right to vote and elect the right government to run the country. If the elected government is good and having the right policies to govern, to manage without corrupt practices and abuse of power, then the people shall enjoy a happier and prosperous life, if not we shall suffer.

Therefore, the young voters shall decide their own faith and future by casting their votes wisely to choose the new government in the coming general election. The question is whether the performance of the present BN government is acceptable or not, and it is up to the young people to judge. He said he would personally suggest to elect a new government for a change to the betterment and to bring about a change in the country and in Sabah.