TRIPLE PROBLEMS DUE TO POOR PLANNING . 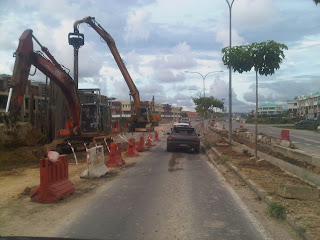 SABAH Progressive Party (SAPP) has taken the government to task for the haphazard development planning that is not only costing the people’s money but also huge inconvenience.

Supreme Council member, Chong Pit Fah said the sewerage line laying works along the Penampang by-pass had been causing enough inconvenience to the people, particularly motorists, due to its implementation done unprofessionally.

“Must the people wait until near election time for projects like this to be completed?” he asked in a statement here.

“The project was done so unprofessionally that it damaged a perfectly good road. In fact, the grade of the ISO-standard road is now lower than an ordinary road,” he said.

“SAPP wants to know who will pay for the damage. Is the government going to award another contract to repair the road, which would not be necessary if there is proper planning,” he said, adding that SAPP wondered if the project was indeed a two-in-one project.

“Is the government paying people to damage the road and install the sewerage line and then pay them again to repair the damages to the road?” he asked.

He said the sewerage line components, which were placed by the roadside also posed dangers to motorists especially at night time.

“Due to the poor planning of just one project the people are forced to face so many hardship from the ensuing traffic jams, good road being damaged and putting their lives at stake. On top of that the people who are taxpayers who are the ones paying for it.

“Who will want to answer to this question?” he asked.