IS UMNO/BN IN DENIAL SYNDROME? 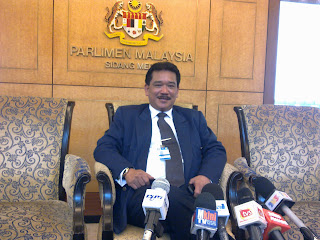 “Who gave Musa Aman the authority to dictate as to how and who should be given this allocation increase, amounting to RM62.7 million? Why only to the 56 UMNO/BN Assemblyman, a partyless assemblyman, but completely and blatantly neglecting Likas, Luyang and Seri Tanjong? Are these three Opposition constituency occupied by ‘Aliens’ and not Sabahans?” said Ronnie.

“The tax paying and registered voters in Sabah have the absolutely right to demand an explanation from the UMNO/BN Government of Sabah.Were the election promises by UMNO/BN Sabah during the 12th General Elections as well as the recent Batu Sapi by-election mere smokescreens,that only UMNO/BN is able to bring development to the people?,” ask Ronnie Klassen.

Ronnie said that PKR views this segregation and total neglect of public funds being channel to the opposition constituiency as an insult to the tax payers in Sabah, particularly the constituency of Likas, Luyang and Seri Tanjong. Public funds belong to the people, as such equal distribution must be adhered.

Ronnie further added, that this announcement in allocation increase, is more of an election carrot to strenghten the positions of the existing UMNO/BN Assemblyman, since Prime Minister Najib Tun Razak had indicated that a Snap Election is nearing.

“The under current signs are strong and the election tremor is now further ascertain with huge funds being channel to all 60 constituency in Sabah,“ added Ronnie as he wish to remind Musa Aman and his fellow UMNO/BN comrades,that public funds belong to the people of Sabah and not UMNO/BN.

On another note, Ronnie also question the State Government's blatant ignorance when it categorically denied the World Bank's declaration that Sabah is currently today the poorest state in Malaysia.

“Is the State Government saying that the World Bank's report is a LIE? How can a state rich in natural resources, be categorise as the poorest state? This can only be possible, when funds derived from our resources are being mis-used or mis-managed,” fumed Ronnie.

Ronnie also demanded to know for public interest, where and what has happen to the hundreds of millions derived from the 15% state government tax on the 4D revenue over the last 10 years. Can the UMNO/BN Government of Sabah kindly provide an account for public viewing, as to how and where the money was used?

“Surely if these funds were intelligently used to eradicate poverty,Sabah would not be declared the poorest state in Malaysia,” challenge Ronnie.

When ask about the current turmoil in PKR, Ronnie who is the Director of Communications for PKR Sabah, said,”I won't really describe the problems as turmoil, it's a self proclaimed problem by individuals who have created an injunction upon themselves. While I won't deny that there are bonafide complains lodged by members over the party elections, the elections committee must act without fear or favour and immediately. I have seen and heard enough, that is why I will submit a proposal to the Supreme Council that the future party elections must be reformed.”

According to Ronnie, In his proposal, the following changes must be seriously considered if PKR intend to see an equal representation in a nationalized party. Currently all positions in the party is a ‘free for all’ vote among members throughout the country.

“From the voting pattern, I've realized that Sabahans and Sarawakians are loosing out, as compared to our West Malaysian counter parts. In order for a greater and equal representation, the leadership should study my proposal seriously;

(all members will vote for their respective candidates in West Malaysia,in Sabah and Sarawak respectively)

The current voting pattern clearly indicates that Sabahans and Sarwakians will never be well represented in the Supreme Council, if changes are not made. In addition, all cabang (divisons) and national elections should be conducted simultaneously.

“This would ensure that members would come out and vote once, rather then the current method, where members are required to vote twice which has taxed the members,” said Ronnie.

“In my recent visit to Parliament, I'm glad that quite a number of PKR's MP's that I met have indicated their agreement and support to my proposal. This is certainly a step closer to realizing a more balance national representation in PKR.We profess reforms and changes, we must also be seen as reforming and changing,” added Ronnie.