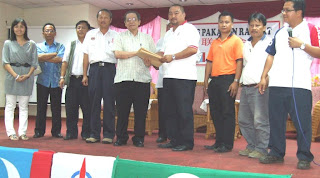 BN has lost in the Chinese-dominated Karamunting constituency. In Sekong the Muslims continue to support BN and implied that PKR and PAS will have to work harder to bring the whirlwind to this community. Pakatan Rakyat needs to realize the shortcomings of Batu Sapi and must now work closely with each other to bring about tangible change to the political landscape of Sabah.

In view of this two 'Majlis Pakatan Rakyat' were organised in Kota Belud and Kudat on 19th November 2010 graced by Lim Kit Siang and YB Teo Nie Ching (MP for Serdang). The afternoon lunch talks brought together the leaders of Pakatan Rakyat in the Kota Belud parliamentary constituency. The dinner talks in Kudat were also well attended by leaders from Pakatan Rakyat, a very positive sign in the consolidation of the Pakatan Rakyat in Sabah. 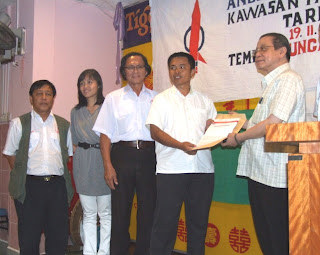 The Sabah DAP Protem-Committee for Usukan and Kadamaian has been established. Lim Kit Siang also received more than 50 membership forms from the Protem-Chairman of Sabah DAP Matunggung Branch, Juining Jiun during the diner at Kudat withnessed by the Sabah DAP Kudat Chief, Alex Wong.

Lim Kit Siang in his speech continuously reminded Sabahans of their loss under the UMNO and BN government. He said that the World Bank has reported that Sabah is the poorest State in Malaysia and that the poorest community are the Rungus who are predominantly living in the northern region of Sabah. Lim added that UMNO and BN must be changed if the people of Sabah expect to be out of poverty. He asked the people to place their trust and vote for Pakatan Rakyat.

YB Teo Nie Ching informed the people that the Pakatan Rakyat-led government in Selangor and Penang have transformed the economy of the two States into a vibrant and health. In fact, Penang is now running on a positive budget. The welfare programs from these two State governments are touching many people in the two States. The provision of free water, free tuition and other assistances are getting strong support and is expected to be rooted for a very long time.