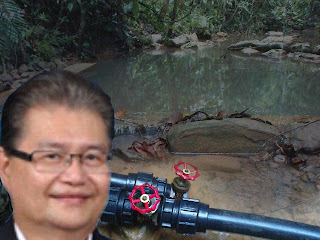 REFER to the Federal Government had pledged RM6.1 Billion for water and electricity supply projects in Sabah within the next two years stated in the local newspaper. Sabah DAP questioned the Government’s sincerity as to whether it was prepared to keep its last election promise to improve the rural infrastructure such as rural roads that were bad, damaged and needed urgent repairs and maintenance in many rural areas within Keningau District, Melalap and Kemabong sub-districts in Tenom Constituency.

Dr Benjamin Yapp, Sabah DAP Parliamentary Liaison Chief for Keningau and Tenom claimed that the bad interior roads in Sabah contributed to many fatal accidents and loss of lives as appeared in the news headlines frequently in Sabah.

The rural people complained to Sabah DAP for neglecting and failing to repair and maintain the many networks of bad interior roads that affected the livelihood of the rural communities as they depended on road transportation and frequent travelling from their villages to places of work, market places and rural clinics.

They had to endure the bumpy, dusty and bad road conditions that often damaged their cars and vehicles. Besides the potholed roads filled with rain water had made driving troublesome and perilous in the rural areas.

A lot of bad roads in Keningau and Tenom District were not being improved or, maintained for decades! During heavy showers and rainy season, it made it very difficult for rural commuters and vehicles to travel in these badly battered road conditions.

These bad interior roads caused frequent accidents. Apin-Apin road leading to Tambunan was dark and without lights at night that posed danger and risks to traffic. Sabah DAP Interior mobile service Unit for the interior had been monitoring the bad road and other interior infrastructure to voice for the grievances of the rural communities. It is hoped that with the allocation for rural infrastructure development, the rural communities would ultimately improve in their standard of living.

The interior such as Melalap was facing years of problems in getting piped, clean and treated water supply. Until this very day, the rural communities there were still using the old methods of gravity water supply from the hill streams that was unsuitable for drinking as it was unclean, untreated and often contaminated with disease germs and detrimental to the health of the rural people.

Especially during the draught season, gravity water normally ran dry and in many occasions the rural folks had to depend on wells and occasional rain-water. Dr. Benjamin urged the Government to make immediate allocations to improve the rural infrastructure for the interior districts that were in great needs for the benefits of the rural communities.