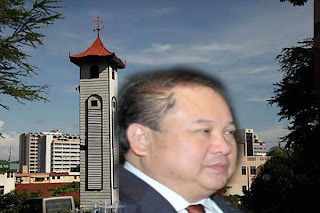 THE DOGGED determination of the chairman of the Sabah low-cost housing authority to build a controversial multi-million ringgit 16-storey integrated complex on a historic site smacks of ‘personal interest’, according to a conservation group here.

Heritage Sabah said that ‘something is not right’ with the persistent moves by the Sabah Housing and Town Development Authority (SHTDA) to ‘vandalise’ the site where the iconic 100-year-old Atkinson Clock Tower stands.

As far as the group is concerned, the chief ‘vandal’ is SHTDA Chairman, Datuk Rubin Balang. It wants him to step down for ‘failing to uphold his duties and responsibilities as a government servant’.

The Sabah-based group took aim at Balang for downplaying the historical value of the tower during this week's State Legislative Assembly sitting.

The group said Balang's actions and comments did not reflect his duties as a government servant, but rather that of a private developer.

Heritage Sabah spokesperson Richard Nelson Sokial pointed out that based on the SHTDA's profile on its website, its main role is to improve living conditions of Sabahans in rural areas and suburbs by constructing low-cost houses.

"What does building a luxurious 16-storey shopping mall-cum-hotel in the middle of the city – on top of a historical site, no less – have to do with SHTDA's portfolio?" he asked.

He said the group regretted that Balang has continuously and deliberately looked for reasons to diminish the historical value of the clock tower site in order to justify this project.

"It goes to show that some people will say anything to justify building the shopping mall.

"We are extremely shocked and disappointed. Over the years, landowner SHTDA has not even provided dustbins or proper lighting at the Atkinson Clock Tower site as a show of goodwill for visitors coming to see this landmark."Now suddenly Balang claims that the only way to enhance the place is by building a big commercial building next to the clock tower. There's no logic in such statements. What is his true agenda?" he asked.

Sokial said the group was of the view that Balang should resign because he seemed to have deviated from his appointed role as SHTDA chairman to facilitate the development of new townships in Sabah, especially outside of Kota Kinabalu.

He also took Balang to task for going on record to say that the clock tower and its site which survived World War Two had no historical value.

"His latest comments are not only a direct insult to the efforts of the Sabah Museum, historians, heritage advocators and our local tourism industry but also the people of Sabah who have long regarded the Atkinson Clock Tower as one of the few British colonial historical sites left," he said.

He said the site on which the clock tower was erected was the focal point of the local community since the establishment of the township of Jesselton in 1899 and its development into modern-day Kota Kinabalu.

The tower was also used as a shipping beacon for decades until land reclamation made it less prominent. This makes the site historical because the tower and its exact location contributed towards the prosperity of the town, Sokial said.

"The Atkinson Clock Tower is the only point where the citizens of the city can still trace our early history since 1905.

"Why is Balang so keen on developing this 16-storey commercial shopping mall project which will block the view of the Atkinson Clock Tower?

"Is he a personal beneficiary if this shopping mall project is approved? Why is SHTDA now building shopping malls in a city already crowded with shopping malls, when it should be concentrating on low-cost housing in new towns?

"The citizens of Kota Kinabalu deserve better than this. We do not want to live in the shadow of yet another huge commercial building that not only threatens our historical legacy but reminds us that there is no hope for a better Sabah because those entrusted to serve the people are putting their personal agendas ahead of the people's needs," Sokial, an architect, said.

"We thank Masidi for his concern and sensitivity towards our public campaign in our efforts to save our city heritage landmark and its surrounding historical site," Sokial said.

Balang, when debating the state Budget 2011 this week, had said that the site of the clock tower has no historical value at all.

He said that Francis George Atkinson was part of the British squad who on Jan 26, 1900, had been involved in an attempt to poison the Mat Salleh.

He was supported by Sabah Archives Director, Datu Tigabelas Zainal Abidin who said shifting the tower merited consideration as the present site has no historical value.

Historical value, Tigabelas said, was determined from three points: the history of the tower, the site and the person.

He said that while the clock itself has historical value, the site did not as it was just a convenient place to erect a clock tower where all could see it during the colonial era.

Tigabelas suggested that the clock tower be shifted to a new site and the wooden tower itself be replaced with a more sturdy structure while retaining the clock.

"Our history is our future and we can use our way to preserve it," he said.

The Atkinson Clock Tower was gazetted as a monument/historical site under the Antiquities and Treasure Trove Enactment on Oct 27, 1983, before that provision was cancelled on March 26, 1998.

The tower was re-gazetted as a clutural heritage site under the Cultural Heritage (Preservation) 1997 in April 1998.

"This clock tower is so significant that it received recognition from the federal and state governments as a main icon on postage stamps during colonial times in 1918, 1950, 1954 and in post-independence on June 6, 2007," said Masidi in countering Balang and Tigabelas' arguments.

He said that it was also significant that the tower was placed fourth on a list of more than 100 clock towers compiled by international travel guide Lonely Planet.

Public support for the Heritage Sabah group opposing the multi-million ringgit project has ballooned to more than 2,000 online signatories and hundreds of written petitions from people from all walks of life, stating their objection to the project.